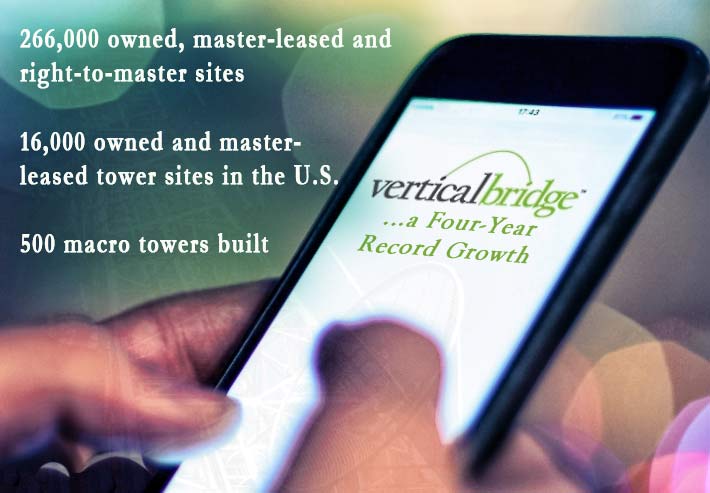 Vertical Bridge Holdings, LLC, the largest private owner and operator of communications infrastructure in the United States, today announced that it has grown its portfolio to 266,000 owned, master-leased and right-to-master sites. The company, which is entering its fifth year of operations, also announced that it has built more than 500 macro towers for U.S. telecommunications carriers to date, with the majority having been constructed within the last year.

The announcements mark two more milestones for the company, which has grown into one of the nation’s top broadband and broadcast infrastructure providers.

Since Vertical Bridge was founded in 2014, the company has had a string of successes that includes four securitizations in the last two years as well as more than 250 acquisitions, which have helped to increase its owned and master-leased tower portfolio to over 16,000 sites across the country.

“Vertical Bridge has been on an outstanding growth trajectory since its start only a few years ago thanks to co-founders Alex Gellman, Bernard Borghei, Mike Belski and the team they’ve built,” said Marc Ganzi, Executive Chairman of Vertical Bridge and Co-Founder and CEO of Digital Bridge Holdings, LLC, Vertical Bridge’s largest investor. “They have continually found new ways to expand their portfolio, develop new partnerships and meet the needs of infrastructure customers in a dynamic sector.”

“When my co-founders and I started Vertical Bridge, our goal was ‒ and still is ‒ to disrupt the wireless infrastructure model with a different type service ‒ one that allowed us to move quickly while remaining extremely flexible,” said Alex Gellman, who also serves as CEO. “This model has been a key driver to our success, and we wouldn’t be able to do it without the right team in place ‒ from investors to management to every one of our employees. We are extremely grateful to have had their support and dedication over the past four years and look forward to continuing to work together as we keep growing.”

According to Bernard Borghei, whose role also includes Executive Vice President of Operations, another important factor to the company’s success has been its ability to adapt to the changing needs of the wireless communications sector.

“U.S. digital infrastructure is at an exciting place as 4G (LTE) networks grow and carriers prepare for 5G,” Borghei said. “500 mAs our partners expand their networks and technologies evolve, we’ll continue to look for new and innovative ways to help them increase their capacity and coverage that go beyond the traditional infrastructure model.”