In a Tweet yesterday, FCC Commissioner Jessica Rosenworcel said it’s time to survey the nation’s laws and consider what happens with a declaration of a national emergency as President Trump has threatened to do to build his southern border wall which Rosenworcel’s fellow Democrats are blocking. 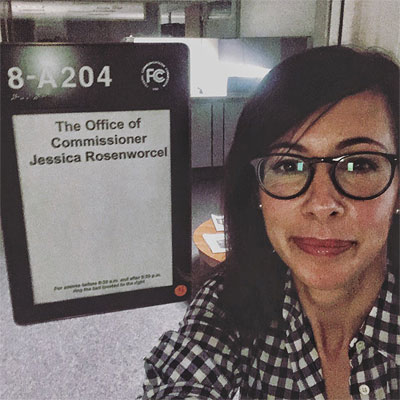 FCC Commissioner Jessica Rosenworcel Tweeted this picture of herself Monday in the FCC’s mostly vacant headquarters.

She said in the War Powers of President code, it allows the President to shut down or take over communications in war or emergency.

The Act clears the way for the President if there “exists war, threat of a war, or a state of public peril or disaster or other national emergency” to be able to amend or suspend the FCC’s rules pertaining to broadcast stations or any device capable of emitting electromagnetic radiations between 10 kilocycles and 100,000 megacycles.

The U.S. Code allows the President to close any station since it could be a navigational device, but the code is silent on whether broadcasting fake news is actionable.

Rosenworcel said that 911 infrastructure fixes and rural broadband funding are better alternates for the $5.6 billion that President Trump is demanding for a southern border.