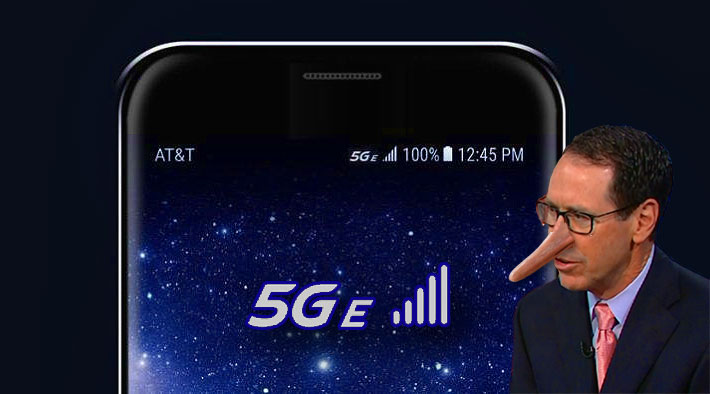 AT&T’s 5G E popped up on some phones through an over the air update, but Verizon, T-Mobile and Sprint want to Wackamole it back to LTE.

In a statement Monday, Verizon, the nation’s largest mobile carrier called upon carriers to not use the term 5G for services until they use actual 5G hardware and radio standards. It was obvious that it was directed towards AT&T whose recent over the air upgrade displayed a “5G E” logo on certain Android devices in lieu of the standard LTE image.

When it appeared in photos this week, Verizon’s Chief Technology Officer, Kyle Malady, published his canned article entitled, When we say “5G,” we mean 5G, castigating their closest competitor.

AT&T said its “E” is intended to stand for “Evolution” and will be displayed in markets where AT&T conforms to certain advanced characteristics of 4G LTE service, but Verizon finds their marketing ploy disingenuous.

“That’s why we’re calling on the broad wireless industry to commit to labeling something 5G only if new device hardware is connecting to the network using new radio technology to deliver new capabilities. Verizon is making this commitment today: We won’t take an old phone and just change the software to turn the 4 in the status bar into a 5. We will not call our 4G network a 5G network if customers don’t experience a performance or capability upgrade that only 5G can deliver,” Malady said.

In keeping with his irreverent style, T-Mobile CEO John Legere Tweeted, “Well, it’s time to call Bullsh*t on the industry again… and I think you know what it’s about.” In a T-Mobile Tweet, the carrier said “didn’t realize it was this easy, brb updating,” and showed a video of someone pasting a 9G sticker over the LTE icon on their phone.

Sprint CTO John Saw joined the marketing fray and in a statement said, “AT&T is blatantly misleading consumers. 5GE is not real 5G.”

Sprint said it will launch and market “real” 5G in the first half of 2019. The carrier is designing its mobile footprint at launch to cover the downtown metro areas of nine top cities.

AT&T misrepresenting 5G on their devices could mislead consumers that do not understand the approaching technology.

The addition of upgraded LTE features such as 256QAM and 4×4 MIMO will not change the fact that a network is still LTE.

Due to the government shutdown, the FTC and FCC are not available to identify whether penalties should be imposed upon AT&T.