Broward County Florida Commissioners ranked public safety over nature when they agreed to erect a 325-foot self-supporting tower in West Lake Park (left) rather than on the top of the Circ Hotel in Hollywood. The county was under pressure to fix their overloaded communications system that was crippled during last year’s Parkland school shooting that killed 17 students and staff and wounded 17 others.

Broward County Florida Commissioners yesterday approved a 325-foot communications tower in West Lake Park in Hollywood, a controversial site required to complete a new $59.5 million network awarded to Motorola Systems that is expected to be up and running by year’s end.

County officials have been criticized for not moving faster to replace the county’s old and overloaded system that reached capacity in 2001 — a network that was crippled during the Fort Lauderdale airport shooting in 2017 and the Parkland school shooting last year.

Hollywood officials didn’t want the tower built in a park known for its kayaking, mangroves and natural areas and offered up the Circ, an apartment and hotel complex whose management said they would provide a very favorable lease rate and wanted to work with the city and county.

Dueling engineers only agree to disagree
The county hired Raleigh, North Carolina-based KCI Technologies to review the Circ site and in a January 21, 2019 report, P.E. Eric Kohl said in his summary, “My overall recommendation is that this site NOT be utilized for this project, particularly when compared to a new tower location specifically designed for the new system. The site can be made to work, but it will require extensive construction efforts and will have several potential long term challenges, in particular, maintenance related.”

However, Commissioners were reportedly considering the hotel site off of Polk Street

The Commissioners held a public workshop on April 9 to discuss the Circ location, but it appeared that they were being swayed to favor the West Lake Park site, and they did with an 8-to-1 vote yesterday, the minimum required to override restrictions on how county park property can be used.

During the April workshop it was stated that it would cost between $2.1 million to $2.8 million to construct the microwave system on top of the Circ, and that did not include any additional structural retrofitting and delay costs.

Commissioner balks at $1.2 million helicopter estimate
It was stated that due to the location of the hotel, a helicopter would be required to lift the 8-foot microwave dishes, 6 omni antennas, batteries, generator and radio equipment, to the rooftop at an estimated cost of $1.2 million or a crane at $780,000.

A Commissioner was taken back by that estimate, questioning whether the county was buying the helicopter.

The Circ’s building manager said he recently hired a crane to put something on the roof and they paid $4,000.

Although it was brought out in questioning that they did not visit the site, they had reviewed KCI’s report and other available documents and believed that hoisting equipment could be used on the side of the building. KCI said they were informed by contractors that the layout of the rooftop prevented the use of a hoist.

KCI said that the site might require stealth or concealment of the microwave and omni antennas, generated by the owner or the State Historical Preservation Office (SHPO). They said that this would negate the coverage guarantee or void the microwave path warranty due to the potential degrading of the signal. They stated that this concern could not be completely determined until final testing of the installation occurs.

Selby disagreed, in their report stating that stealth antennas have been manufactured for over 18 years and the technology has improved tremendously. They also said they believe that SHPO should not be a problem for the Circ application.

Construction window seen as excessive
It was stated during the presentation that it would take seven months to construct the Circ site, and possibly even longer if a structural foundation retrofit would have to be made to support the weight of battery banks.

Selby’s report said that the delay would not be as long and the cost as great as the county report suggested. It also questioned the inference that communications at the Circ site could be degraded due to shadowing.

One Commissioner, said that next generation broadband is changing the landscape and “cell towers are going to be obsolete”.

Another didn’t care how much the Circ site cost, she just wanted to get it done, and then left the almost three hour workshop.

Opponents of the West Lake Park site believe that information showing the Circ rooftop site could be done faster and at a comparable cost was intentionally disregarded.

The county’s inability to move faster on the new network has angered members of the state’s Marjory Stoneman Douglas Public Safety Commission, set up to look into the February 2018 Parkland high school shooting that killed 17 and wounded 17 others.

Casting the dissenting vote, Commissioner Beam Furr, who represents the Hollywood area, said the county’s report was biased against the Circ location. 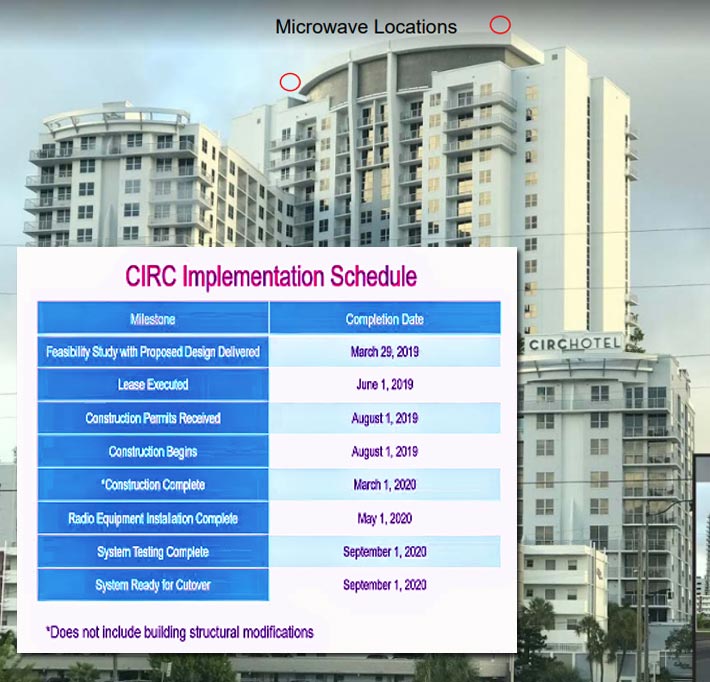 Broward County’s study showed a construction window that appeared to be too long. Proponents of the Circ site believe it was purposely lengthened to put pressure on using an alternate location. They also believe that it wouldn’t be necessary to spend $1.2 million to have a helicopter offload rooftop antennas, a generator and radio equipment.