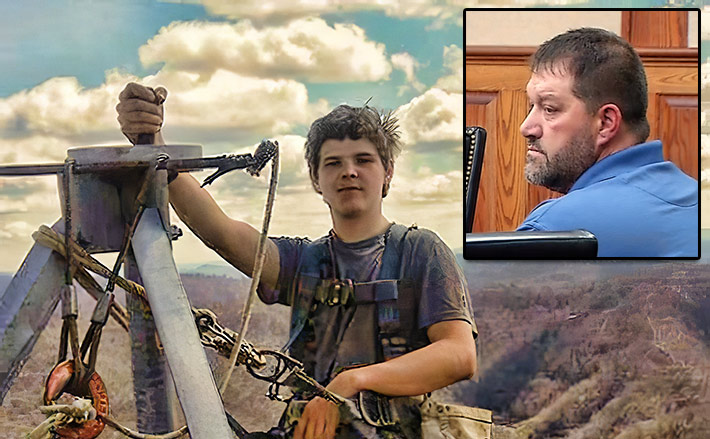 Christopher Strausbaugh (inset) will be sentenced on December 17 for a felony fraud count.  Investigations into his company, S&S Tower Services, Inc.,  began after an employee of the contractor, 19-year-old Tyler Comer, pictured above in a Facebook post, fell to his death in 2016.

A 2016 fatality of a 19-year-old West Virginia tower technician in Kentucky has resulted in the young man’s employer and the company’s owner entering pleas to the felony offense of engaging in a scheme to defraud Brickstreet Mutual Insurance Company, now known as Encova, of approximately $186,700 in insurance premiums.

Kanawha County, West Virginia Prosecuting Attorney Charles T. Miller, in a statement provided to Wireless Estimator, said that S&S Tower Services, Inc. (S&S), and its President, Christopher Strausbaugh of Mousie, Kentucky, misstated the nature of the work performed for carrier Appalachian Wireless, by telling Brickstreet that their employees do not engage in high-level work and performed work in buildings at the bases of towers and other ground-level electrical work relating to preparing to place the towers in operation, and they didn’t have workers erecting or climbing towers.

However, according to Miller, S&S failed to disclose to Brickstreet the true nature of the work employees performed, stating that their tower techs only worked up to 15 feet above ground level.

It was identified that S&S’ employees work at various heights up to 400 feet.

The facts came to light when an employee of S&S,  Tyler Comer, 19, of Sissonville, Kanawha County, fell 105 feet to his death at a tower S&S was building for Appalachian Wireless in Morgan County, Kentucky.

That death resulted not only in an investigation into the cause of the fatality but also the issues relating to workers compensation insurance coverage and premiums.

As a result of safety violations, the Commonwealth of Kentucky fined S&S $3,500 for a Serious violation of worker safety laws, specifically violations of safety training and education, a frequent concern of safety professionals knowledgeable of companies that shave training to grow profits.

The investigation by the West Virginia Office of the Insurance Commissioner, Fraud Investigation Section, determined that S&S defrauded Brickstreet of $186,700 in workers compensation insurance premiums and the State of West Virginia of approximately $16,300 in insurance taxes. Miller noted.

“By falsely stating the nature of work performed by its employees, S&S only paid approximately one-fifth of the amount of insurance premiums due and owing Brickstreet and one-fifth of the taxes due to the State. This underpayment gave S&S a competitive advantage in the construction of cellular telephone towers,” Miller said.

Unfortunately, Miller noted, no workers compensation claim was filed on behalf of Tyler Comer’s estate. In addition to the $186,700 in restitution payable to Brickstreet Insurance Company, S&S and Strausbaugh will be required to pay approximately $16,300 to the State of West Virginia for unpaid workers compensation insurance premium taxes.

These taxes are paid to retire the ongoing and outstanding workers compensation debt from when the State of West Virginia left the workers compensation insurance business. Sentencing is set for December 17 before Judge e Joanna I. Tabit, a Judge of the Circuit Court of Kanawha County.

Miller recommended probation for Strausbaugh and a fine of $1,000 for his corporation.

The case was prosecuted by Rob Schulenberg of the Kanawha County Prosecuting Attorney’s Office.

Miller said that because Comer’s death did not occur in West Virginia, no offense could be prosecuted relating to his death.

S&S was established in 2006, according to West Virginia Secretary of State records, and filed annual reports through 2012. S&S refiled in 2015, showing its office address as a mobile home at 195 Packard Drive in Glenwood, WV.

There is no business relationship between S&S Tower Services and S&S Communications Specialists Inc., an erector that had two technicians die in 2014 when a tower collapsed in Nutter Fort, WV.

A first responder was also killed in that incident. His family was awarded $4.25 million following a lawsuit.

Comer was one of seven fatalities in 2016, the same total currently for 2019.