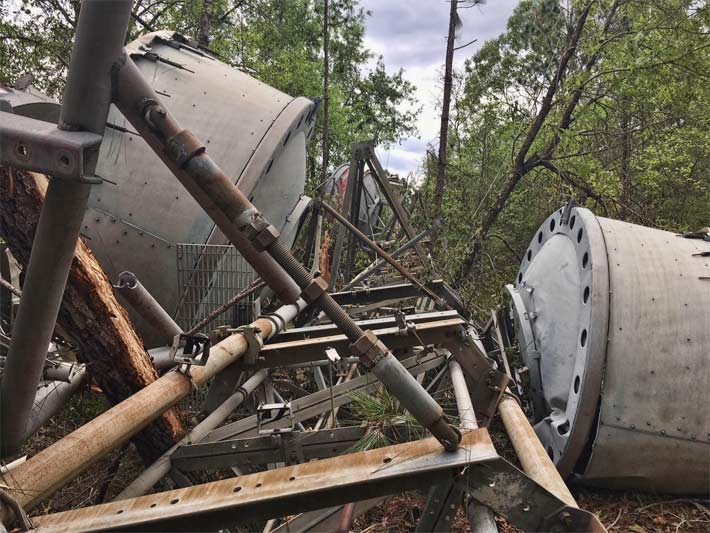 For 15 years Wireless Estimator has covered tower compound thefts and the most common items taken are copper and cell site batteries; on occasion, a generator or air conditioner makes the list.

However, in the annals of bizarre telecom thievery, it’s likely that a theft in McIntosh, Ala. last week will be difficult to top.

Three Alabama men are in jail in Washington County on a $15,000 bond for felling a 150-foot Crown Castle guyed tower, because they wanted it all, and were willing to work for days to remove the microwave dishes and other scrap metal that they could sell.

Sheriff’s deputies said that William H. Cameron, Ricky Reed and David Leon Weaver were arrested as they were cutting up the tower and were charged with first-degree criminal mischief, according to jail records.

The Washington County Sheriff’s Office said  On April 5, 2019 at 10:48 a.m., Lt. Bobby Jeter received a call from their dispatch advising him the operations manager with Crown Castle, Vic Palmer, was at their cell phone tower on Price Rivers Rd.

Palmer, according to authorities, stated that someone had cut down the 150-foot tower and it was now laying in the woods. Once on scene, Lt. Jeter confirmed that the guy wires were cut, causing the tower to fall, and damaging a building also belonging to Crown Castle.

Lt. Jeter went to the residence across from the scene and spoke with the owner, Robert Reed. He asked if he had noticed any suspicious activity at or around the cell phone tower.

Reed informed Lt. Jeter that on April 3, 2019 around 8:00 p.m. his wife heard a loud noise, but they both determined it was nothing of much importance. Lt. Jeter asked the residents if they would keep an eye out on the tower, and if they noticed anything suspicious to contact the sheriff’s office.

On April 7, 2019 around 5:00 p.m. Reed contacted Washington County dispatch and reported what he thought to be the noise of power tools being used at the tower site.

Washington County deputies and MicIntosh police officers responded to the scene and witnessed the three men using a portable generator and power tools to dismantle the tower.

The generator was running, so there were three guys in the woods cutting the tower up, Lt. Jeter said. “They were able to sneak up on them and they didn’t even hear them because the generator was making so much noise.”

Palmer informed authorities that Crown Castle has more than $300,000 invested in the tower – most likely for an insurance claim that will follow.

Although police are stating that it is a cell phone tower, most industry media wouldn’t report it as such. Photographs that authorities provided did not show any cell antennas. In addition, the microwave dishes didn’t appear to have any transmission lines.

It appears to be a rusted shell of a decommissioned site that Crown Castle had no tenants on, and there is a possibility that the thieves were aware of that – and no NOC would be alerted when it was toppled.

Crown Castle did not respond to a request for additional information.