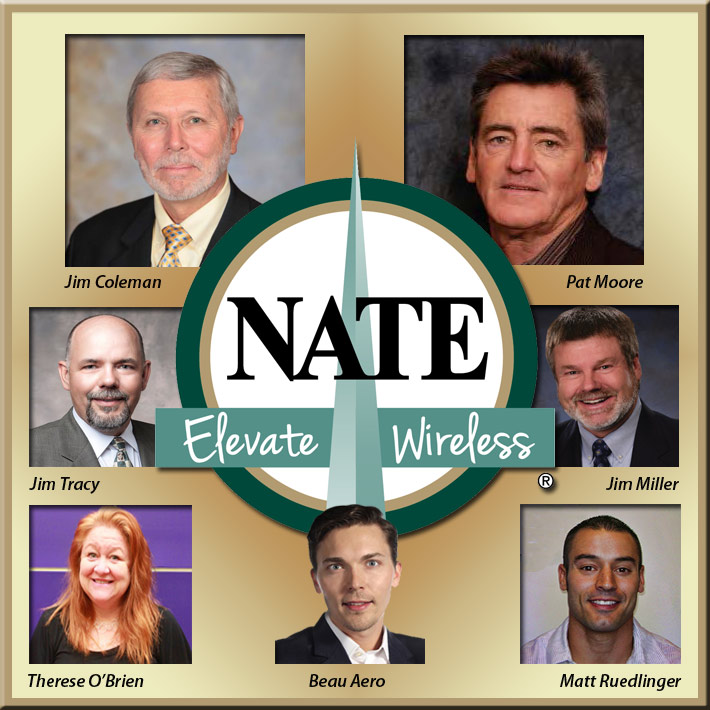 O’Brien, Aero and Ruedlinger awarded Chairman’s Coin; Tracy and Miller recognized for years of service on the NATE Board of Directors

NATE honored Jim Coleman, National Tower Safety Manager at AT&T in Birmingham, Alabama and Pat Moore, Operations Team at Stainless in Cedar Park, Texas during the Awards Luncheon at NATE UNITE 2019 in Grapevine, Texas on Wednesday. FCC Chairman Ajit Pai was on hand to deliver a keynote address at the event.

Jim Coleman was honored as the recipient of the Bill Carlson Lifetime Service Award. This prestigious award recognizes an individual who has made a significant and long-term contribution to the success of the NATE mission and has served the Association continually for a minimum of 15 years.

Jim Coleman has over 47 years of telecommunications and broadcast experience. From 1977 to 2012, Jim served as the President/Broadcast Engineer for Southern Broadcast Services, Inc. in Pelham, Alabama where he owned, managed and conducted day-to-day operations in all phases of construction of self-supporting towers, guyed towers and monopoles, conducted work on structures up to 2000’ and was responsible for erecting structures up to 1500’.  From

From June 2012 to February 2013 he served as Member/President of Southern Broadcast Services, LLC. From June 2013 to October 2014 Jim held the position of Vice President for MUTI/Sabre Industries Telecom Services in Champaign, Illinois. Since October 2014, he has served as the National Tower Safety Manager for AT&T in Birmingham, Alabama.

“On behalf of the entire NATE community, we would like to offer our heartfelt congratulations to Jim Coleman on receiving this much deserved recognition,” said Executive Director Todd Schlekeway. “I witnessed first-hand the instrumental leadership role Jim played during his tenure as Chairman helping set in motion key initiatives and policies that have led to this era of unprecedented growth and influence the Association is experiencing today. Through his many years of involvement with NATE, Jim has embodied the leadership traits and a commitment to safety that the award’s namesake, Bill Carlson, would be extremely proud of,” added Schlekeway.

Pat Moore was honored as the recipient of the Distinguished Service Award. This notable award recognizes a past or present standing committee member who has demonstrated direct and individual contributions to the mission of NATE and whose performance has proven so exceptional that it profoundly affects the success of the Association.

Pat has been in the tower industry for 42 years. Educated in Austin, Texas, Pat began in the tower industry in November 1976 and worked in the field until late 1983. At that time, Pat and long-time friend and colleague, Don Doty, started their own tower maintenance and construction business. Pat and Don were Founding Members of NATE in 1995.

Pat is one of the original members of the NATE Safety & Education Committee and has remained active on that committee since the Association was established. Additionally, Mr. Moore was also actively involved in the development and implementation of the ANSI/ASSP A10.48-2016 Standard – Criteria for Safety Practices with the Construction, Demolition, Modification and Maintenance of Communication Structures and currently serves on the National Wireless Safety Alliance Board of Governors.

During the Awards Luncheon, NATE also honored Beau Aero, President and founder of GME SupplyCo in Columbia, Missouri, Therese O’Brien, National Account Executive at TESSCO Technologies in Hunt Valley, Maryland and James Ruedlinger, Senior VP of Engineering for ERI Installations, Inc. in Chandler, Indiana with the prestigious Chairman’s Coin award. The Chairman’s Coin is an award recognizing individuals who have provided excellent dedication and service to the mission of NATE and to encourage continued involvement.

Departing members of the NATE Board of Directors Jim Tracy of Burley, Washington and Jim Miller of Colorado Springs, Colorado were also recognized for their years of service to the Association at the luncheon.

“Today was a great day for NATE as we were able to honor these dedicated individuals who have all contributed greatly to NATE’s legacy,” stated NATE Chairman Jimmy Miller from Gulfport, Mississippi. “I am proud to be serving an organization like NATE that recognizes the selfless men and women who are willing to roll up their sleeves for a cause that collectively benefits an entire industry,” Miller added.

The Bill Carlson Lifetime Service, Distinguished Service and Chairman’s Coin awards were made possible due to the contributions made by the NATE Member Services Committee. The awards are an annual fixture at the NATE UNITE event. For additional information on NATE, please visit www.natehome.com.