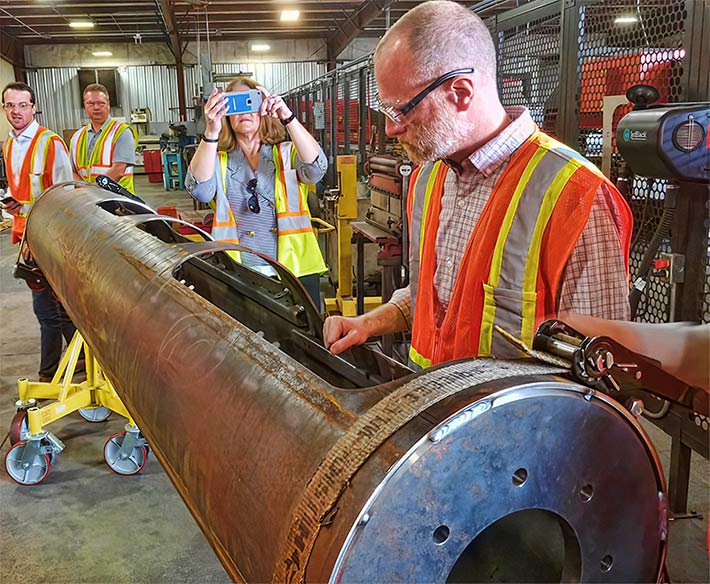 Before Commissioner Brendan Carr provided his Monday evening keynote address at the National Association of Tower Erectors’ annual convention, NATE UNITE 2019, in Grapevine, Tex., CommScope gave him a Cook’s tour of their sprawling 10-acre manufacturing facility in Euless where he learned from engineers, product executives and other company officials of their ability to provide vertically integrated wireless products from raw materials to the finished deployable products.

He then visited Lewisville where he took part in the grand openings of Ericsson’s new 26,000 square-foot Center of Excellence training facility where he observed how field services technicians experience best-in-class training and support.

During the visit attended by Wireless Estimator, Carr informed CommScope Director of Corporate Communications Kris Kozamchak that “People just assume that it is pixie dust or magic that makes it happen. It’s actually the steel from here that makes it possible for us to have next generation broadband. So, it’s great to get to manufacturing facilities like this to see the real work, the hard work it takes to put up the physical infrastructure.”

And he saw first-hand the training required to safely install that equipment while at the Ericsson facility where he again increased his climbing knowledge by rappelling down shipping containers. Carr had previously climbed the mast of a 2,000-foot tower last October.

Ericsson on its way to becoming nation’s largest wireless contractor

In his comments to the assembled workers and management, Carr used his signature line that broadband users believe that their cell phones rely upon “pixie dust or magic,” and it’s not just coders or programmers that will provide 5G, but it’s the skilled tower crews that Ericsson was training that will be able to safely hone their trade so that America benefits from next-gen infrastructure.

Ericsson is the largest wireless network equipment vendor in the U.S., according to the Dell’Orio Group, a market research firm.

Following Carr’s presentation, he Tweeted that Ericsson is looking to train and hire 500-plus workers for these “good-paying” 5G jobs.

With that full complement of new workers, it would appear that Ericsson will eclipse MasTec Network Solutions with their field services employee count, making Ericsson the largest wireless contractor in the U.S.