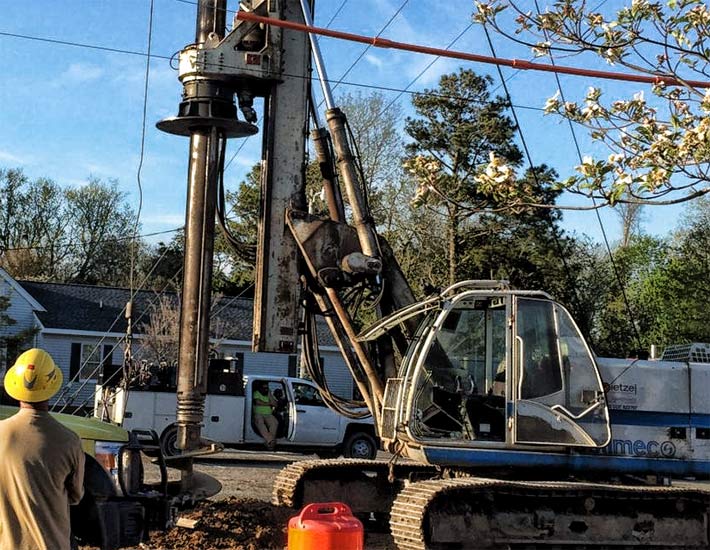 A tower foundation drilling company worker died on April 26, 2019, after being electrocuted on a jobsite, according to individuals knowledgeable of the April 22, 2019 incident that occurred in Accomac, Va.

Kevlin Finck, 30, of Nebraska, employed by Dietzel Enterises, Inc. of  Omaha, was at a construction site when a track-mounted drill rig reportedly had a winch line come in contact at 5:30 p.m. with overhead electrical lines that feed the Accomack County Sheriff’s Department.

Finck was transported to the Peninsula Regional Medical Center for treatment, but passed away on April 26.

The Accomack County Sheriff’s Department informed Wireless Estimator that they did not have a report regarding the incident that was being investigated by OSHA.

Dietzel did not respond to a request for additional information.

It appears that, according to the photo above, at least one power line had been sleeved by the utility company.

Dietzel, a drilling company used by many tower erectors, was subcontracted by Allstate Tower of Henderson, Ky. to install new anchor foundations for an existing guyed tower in back of the Sheriff’s Department. Allstate was reportedly not on site when the fatality occurred.

Allstate was awarded the $316,000 contract to provide new foundations and retrofit the near capacity tower.

According to an Accomack County analysis, the structural capacity of the tower was at 96.5% and the foundation capacity at 144.7%, requiring the need for new foundations and structural retrofitting. County records identify that when the Courthouse Drive tower was erected in 1982 it cost $30,000.