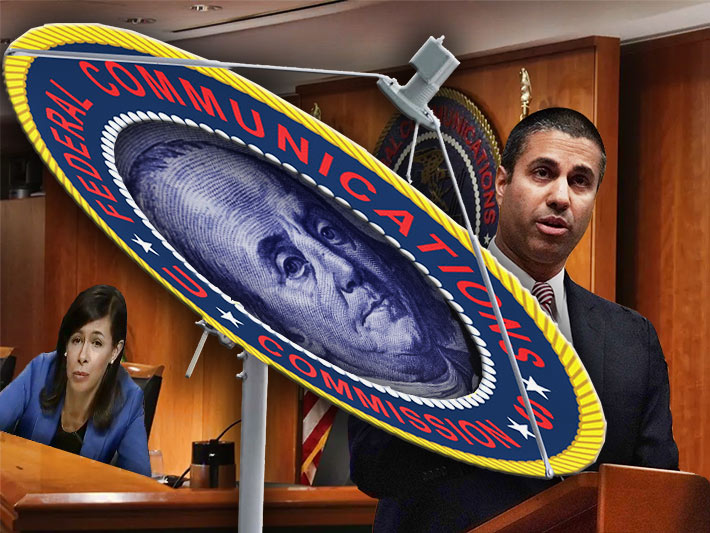 IN BEN WE TRUST – FCC Chairman Ajit Pai’s C-band auction announcement was welcomed by many organizations, but not by shareholders of satellite communication companies such as Intelsat whose stock plummeted 49% this afternoon. The satellite companies wanted to hold a private auction, but Pai thought that the U.S. Treasury’s coffers would benefit from a public auction. One bet smart money might make is to put a few Benjamins supporting that there will be protracted lawsuits claiming the FCC lacks the authority to confiscate C-band spectrum without compensating the satellite operators that currently use the spectrum.

The FCC is ready to start a public auction for C-band spectrum with the objective of developing 5G wireless connectivity in the mid-band spectrum, according to an announcement today from FCC Chairman Ajit Pai.

Pai made his plans clear today,  in a letter to Sen. Roger Wicker (R-Miss.), chairman of the Senate Committee on Commerce, Science and Transportation.

Pai had previously announced that he would determine how the FCC would go about making the C-band spectrum available, which resides in the 3.7-4.2 GHz band, by this fall.

He also outlined four principles that he is convinced needed to be achieved through the FCC’s rulemaking on the matter:

“After much deliberation and a thorough review of the extensive record, I have concluded that the best way to advance these principles is through an auction of 280 megahertz of the C-band conducted by the Federal Communications Commission’s excellent staff,” Pai said in his correspondence to Wicker.

Pai said he was confident that the FCC staff will conduct a public auction that will afford all parties a fair opportunity to compete for this 5G spectrum, while preserving the availability of the upper 200 megahertz of this band for the continued delivery of programming.

The Wireless Internet Service Providers Association, in a release said, “The chairman’s statement is good news for the fixed wireless industry, and WISPA believes it leaves open the possibility that with a few technical rule amendments/changes, the FCC could permit P2MP by an automated frequency coordinator to protect delivery of programming and quickly bridge digital divides in rural areas.”

Citizens Against Government Waste (CAGW) lauded Pai’s action. In a statement, President Tom Schatz said, “I am very pleased that FCC Chairman Ajit Pai made the correct choice and decided to put taxpayers first with his plan to conduct a public auction of 280 MHz of C-band spectrum. This decision is consistent with the four principles Chairman Pai provided to the Senate Appropriations Financial Services and General Government (FSGG) Subcommittee hearing on October 17, 2019.”

It wasn’t good news for the small group of satellite communication companies such as Intelsat, SES, and Telesat that control the spectrum. This afternoon, Intelsat’s shares cratered by as much as 49%. Ten days ago the stock traded at $26.33. It closed today at $8.03.

Last week, JPMorgan downgraded Intelsat and sliced it price target over concerns that Congress might interfere with the company’s ability to sell its C-Band spectrum to 5G internet providers.

The C-Band Alliance proposed to have a private auction, claiming that would lead to a speedier transfer of a portion of the spectrum they control to carriers seeking to establish 5G networks.