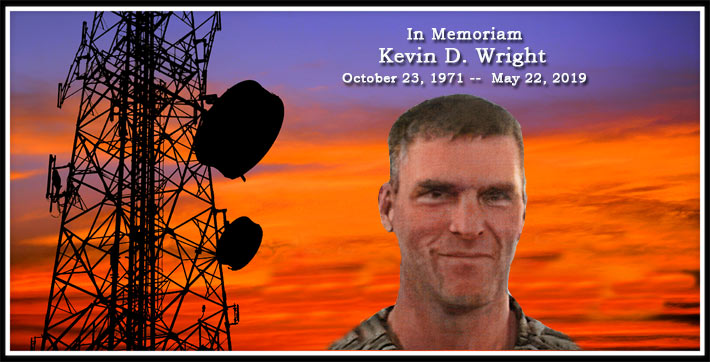 Services have been announced for Kevin D. Wright of Evansville, Indiana, who passed away on May 22, 2019 after falling from a tower in Polk County, Iowa while performing restoration services for KDSM FOX as an employee of Precision Communications, Inc. of Grove, Oklahoma.

Kevin was born in Randolph County, Indiana on October 23, 1971, to David H. and Sandra (Arnold) Wright. Kevin and his wife Dana dated for 11 years before marrying in 2016. He was known as a fearless spirit who enjoyed geocaching, mountain bike riding, backpacking in the wilderness, motorcycle riding, photography and target shooting. He will be missed by his grandchildren who lovingly referred to him as their “Pop-Pop.”

Kevin was preceded in death by his father, David H. Wright, father-in-law and mother-in-law, Greg and Lana Hutchison; and grandmother, Judy Harshman.

Funeral services will be held at 1:00 p.m. on Thursday, May 30, 2019, at Browning Funeral Home, 738 Diamond Ave., Evansville IN with Pastor Bruce Applegate officiating. Burial will follow at Locust Hill Cemetery.

Memorial contributions may be made to the Tower Family Foundation through this link or send their donation into the charitable organization at 8 Second St. SE, Watertown, SD 57201.