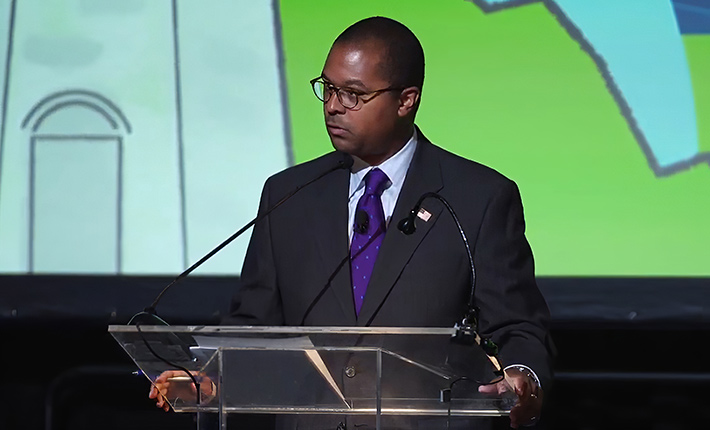 His message was of great interest to the regional operators in the audience, many of them who have the suspect gear in their networks.

Starks said that that the equipment made by Huawei and other Chinese manufacturers presents serious security vulnerabilities. He singled out Huawei’s software that does not have the same consistency from installation to installation as its competitors.

“Programming variations make it difficult or impossible even for Huawei to know exactly what software is deployed in a given build and whether the equipment will accept software updates,” Starks said.

According to security experts, Starks said, Huawei software has “front doors” accessible by both the company and by bad actors familiar with exploiting inconsistencies and flaws in Huawei code.

“Moreover, it’s not just the original software that’s concerning – Huawei systems are typically managed remotely with updates delivered from China.  Many networks and network components get software updates as frequently as every week.  Control over software updates and their delivery essentially amounts to control over an entire network,” Starks emphasized.

Starks said the federal government is seeking to stop the importation and installation of equipment from Huawei and other Chinese manufacturers and the FCC is currently examining whether to ban the use of federal support dollars for the purchase of such equipment.

“But we can’t ignore the problem of the equipment that’s already here,” Starks said.

Starks believes that the U.S. should fund the equipment replacement effort.

“This is a national problem that deserves a national solution, and we shouldn’t expect small carriers – who acted legally and in good faith – to replace their insecure equipment on their own.  As I heard from carriers at the Workshop and earlier today, many of the carriers who purchased this equipment operate on tight margins in rural areas and may not be able to cover the costs of replacement without financial support,” Starks said.

He noted that a “rip and replace” program could cost anywhere from hundreds of millions to over a billion dollars.