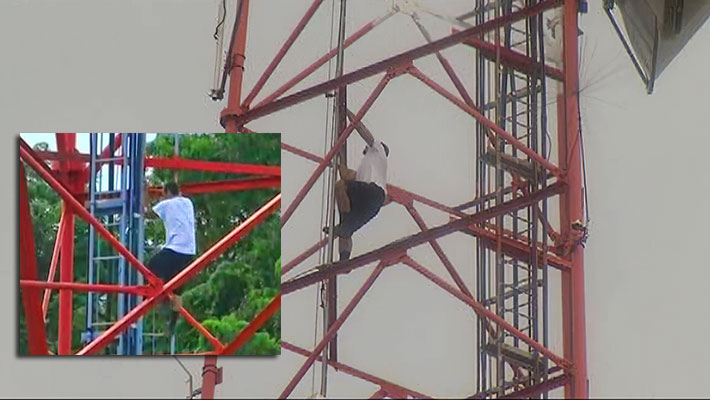 For over seven hours yesterday, Orlando, Fla. emergency workers tried to coax an unauthorized climber down from a TV tower. He eventually came down on his own accord.

Since Americans are largely exposed to national headlines when an unauthorized person climbs a cell or broadcast tower and has to be talked down, there might be a perception that the U.S.’s towers are fertile ground for unbalanced individuals doing a high steel balancing act.

Such was the case in Orlando, Fla. yesterday when a reportedly disturbed man climbed to the top of the 400 ft. WKMG-TV tower, keeping rescue workers at bay for over seven hours before he came down and was likely interned in a hospital for observation.

But the U.S. doesn’t have exclusivity on unauthorized climbers, and despite having one-third the population of India, it pales in comparison to the number of incidents of tower climbers threatening to jump, unlike yesterday’s incident where it looks like the man in gym clothes decided to climb the tower simply because he could.

Almost at the same time that Orlando emergency workers were trying to talk the man down, a 26-year-old man climbed a TV tower 8,400 miles away in India, threatening to jump.

However, many of India’s climbers’ suicide threats are resolved after their message is broadcast.

This  man said he would kill himself if he didn’t get financial help for his father’s liver treatments. He did, and came down.

Six days earlier, a fan of a movie actor threatened to jump off a cell tower if a meeting was not arranged with his favorite actor.

The list of reasons why India’s residents want to plummet to their death is as high as the towers they’re perched upon.

One 23-year-old woman said her boyfriend promised to marry her, but it ended with deception. Thankfully her life didn’t end.

Others who were talked out of ending their remaining hours on earth provided various reasons.

A young man said he couldn’t accept the fact that the woman he was in love with had the audacity to not commit to a marriage.

Poor crop performance was enough for a farmer to consider taking a death dive.

One individual climbed a tower to publicize their concern about the government not doing enough to curtail RF exposure.

A police officer who said he was unfairly fired because he picketed for higher wages, said he would jump if he wasn’t reinstated. It’s known that he didn’t jump, but it’s unknown if he was rehired.

Unfortunately, there are those with issues who succumb from an accidental or intentional fall in America and other countries.

A 37-year-old man, suffering from a mental disability, according to authorities, died when he fell approximately 43 feet off a 200-foot communication tower in Myanmar on Monday.

On August 10, 2019, a 55-year-old man was with his family and friends at a campfire in Jacksonville township, Pa. when he walked to a nearby AT&T tower, scaled the fence, and started to climb the structure. He slipped and died at the tower site.