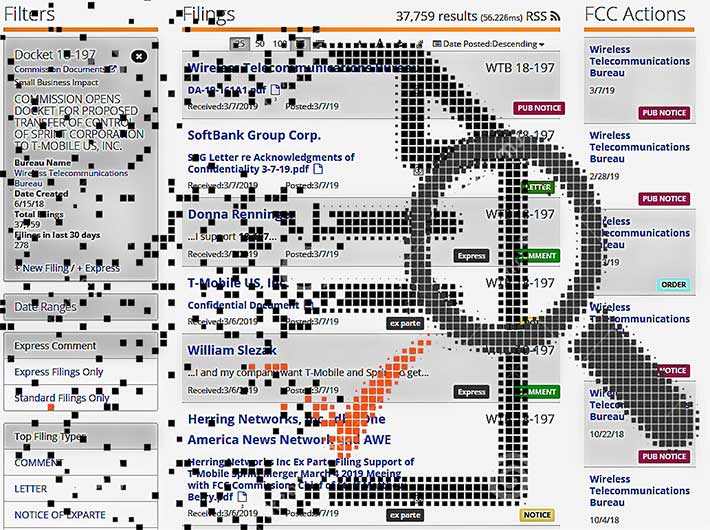 UPDATE: March 8, 2019 – The T-Mobile filing that caused the FCC to extend its time for the review of the T-Mobile/Sprint merger became publicly available again at approximately 3:00 p.m. today after visitors received a confusing ‘Access Denied” message for at least nine hours when clicking on news reports’ links as well as a link in a blog from T-Mobile CEO John Legere that previously opened the document that was uploaded on the FCC’s website.

It’s now the final, final document
The original link is still unavailable, but Wireless Estimator was able to locate another link that will open the document detailing the ‘new’ T-Mobile in-home broadband service. Confusingly, the new FCC link shows the replacement ‘final’ document as Version 2.

Legere also changed the link address in his blog post.

The FCC has not responded to a request to identify why one document was substituted for another and if there were any significant revisions in the second replacement ex parte filing.

A ruling by the FCC regarding the proposed merger between Sprint Corp and T-Mobile U.S. was expected within weeks, but a late Thursday filing by the agency said it wanted more time to review “significant additional information” filed last month and on Wednesday, when T-Mobile provided a lengthy filing updating plans for 5G wireless in-home broadband service.

T-Mobile’s filing disappears overnight
Although the details were heavily redacted in the filing that was available yesterday, and promoted in a blog post by T-Mobile CEO John Legere, the FCC link  since early this morning been showing ‘Access Denied’ for those wishing to review the 63-page report.

The Commission said it is stopping the 180-day informal shot clock and is seeking comment on the T-Mobile’s extension of their economic analysis and the additional information they filed. The FCC said comments should be limited to T-Mobile’s “new submissions and not repeat arguments previously raised. Interested parties must file comments by no later than March 28, 2019. All filings should refer to WT Docket No. 18-197.”

The merger requires FCC and antitrust regulators at the Justice Department to approve it.

T-Mobile said in a statement, “We believe it is a positive step that the FCC is so deeply engaged in understanding this transaction and our recent filing, and we completely understand their desire to have these short, routine, clock stoppage cycles to fully review the merits of our merger with Sprint.”

“We continue to look forward to completing the regulatory approval process in the first half of this year.”

Legere said that home broadband is one of the most un-competitive industries in existence, believing that T-Mobile will change all that.

“And we’ve already got this in the works. T-Mobile will soon begin a pilot of home internet service using a 4G router operating over T-Mobile’s LTE network. Customers will get the router for free, and after the merger, it will be upgraded to include 2.5 GHz spectrum and 5G compatible hardware. The New T-Mobile is coming for you, Cableopoly… you’ve been warned!” said Legere.