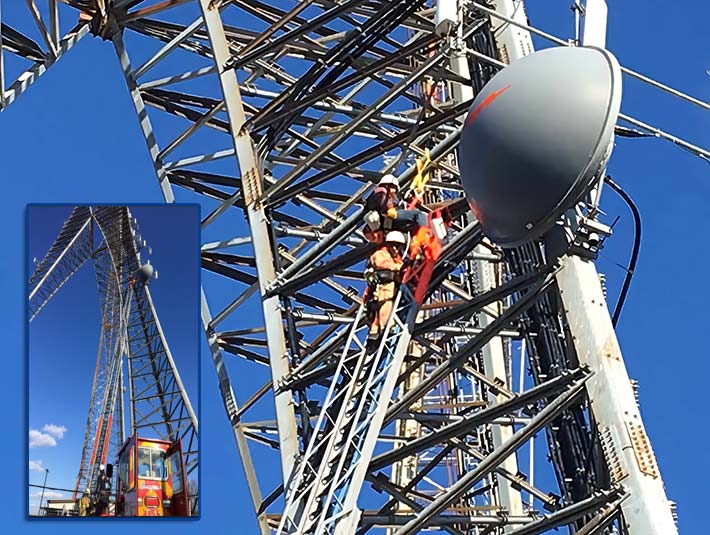 A tower tech was rescued in Washington D.C. off a 760-foot self-supporting tower by D.C. Fire personnel today after he contacted emergency services at 1:50 p.m., stating that he was hypothermic and couldn’t climb down from the 120’ level, which according to rescue videos was where a cell site sector was located. 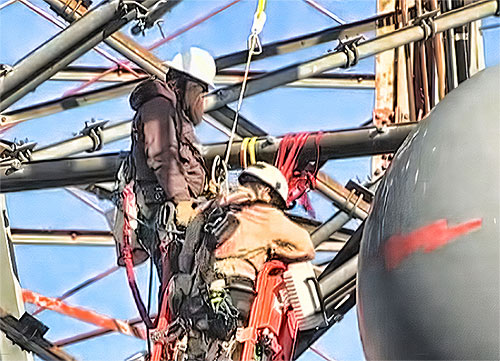 Although an individual knowledgeable of the incident said there was a second worker on site, authorities could not confirm how many individuals were working on the structure or the company they were employed by. A fire rescue worker, below, assists the tech in transitioning to the 100-foot ladder.

It took approximately three hours to rescue the man, appearing to be in his late 20s, since the largest ladder truck only reached 100-feet and the tech had to make it down 20 feet.

While the rescue was being performed, a larger crane was being brought in by officials.

The tower is located to the rear of the Metropolitan Police Department Fourth District Headquarters on Georgia Ave. NW, and has multiple tenants on it.

It was constructed in 1989 and is owned by the District of Columbia.

The tower tech was evaluated by EMS workers and they said that he did not require hospitalization and the worker quickly left the scene, not offering to talk to reporters.

An EMS spokesperson informed Wireless Estimator that they could not provide any additional information and did not know if there were any additional crew members that were on site when the rescue was occurring.

An individual knowledgeable of the incident informed Wireless Estimator that there were two workers on the  tower prior to the 911 call for assistance.

Temperatures during the rescue hours hovered between 40 and 39 degrees. Wind speeds topped out at 11 mph, according to Weather.com. However, Weather Underground identified that temperatures were in the range of 31 to 33 degrees and winds reached 21 mph. Those readings were taken at 13 feet above ground level.