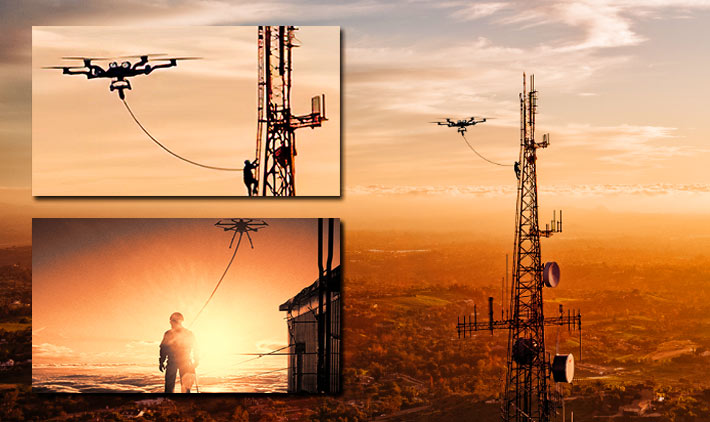 If April 1 isn’t your spouse’s or a loved one’s birthday or other special date, the day sneaks up on you along with a number of April Fools’ Day articles and videos, oftentimes catching you off guard as Wireless Estimator’s Huawei CFO’s Releasei and Dust Spectrum articles did to over 8,000 viewers yesterday, many of them not catching on until they were deep into the story. The FCC alternative spectrum technology reportedly reached some Commissioners on the vaulted eighth floor of their headquarters – or wherever they were when they read it.

Safety product supplier and training company Gravitec Systems also caught many viewers by surprise with their GraviHook fall protection system where a drone protects a tower technician from falling. The unmanned aerial vehicle can even be programmed to lower the fallen worker to a pre-set muster location.

As viewers read further they would note the maximum load capacity of 25 pounds and the pearl and anti-slip knit stitch lanyard.

But in a world where so many people rely upon digesting complex issues in 280 characters, some folks read no further and actually called Gravitec to learn about the new innovative product that could be pre-ordered and available in 90 days.

They were then diplomatically informed that it was a prank.

Gravitec marketing coordinator Abigail Holmes said that some of their salespeople were contacted by interested buyers of the new product as they anticipated since the company has been pulling an annual April product prank for the past five years.

“This is a team effort and the entire company enjoys it. We already have a list of options for 2020,” said Holmes.

T-Mobile and Sprint April 1 gags make their debut
T-Mobile’s CEO John Legere closed his BoothE door as he made a call and couldn’t hear if we were laughing in the below April 1 video. The gag initiated a semblance of wishful thinking that it would be nice sometimes if in public we didn’t have to listen to everyone’s conversation.

Every self-respecting Francophile and beret enthusiast embraces the opportunity to indulge in the finest brie, baguette and Bordeaux. So why not live all aspects of life to the fullest, Sprint asked in their April 1 video. It’s not quite as humorous as Legere’s presentation, but then again, mon Dieu, one should never outshine their future boss.