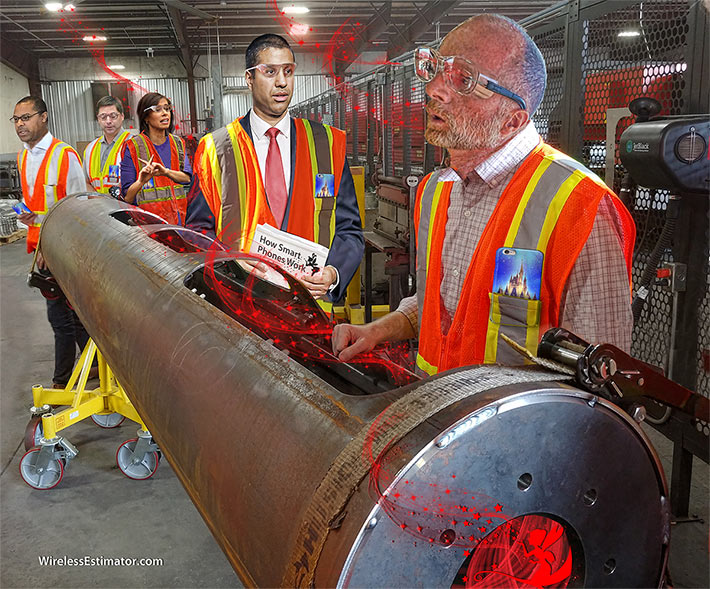 In this beta testing facility photograph taken last month that was obtained by Wireless Estimator, FCC Commissioner Brendan Carr (right) conjures up spectral efficiency as Chairman Ajit Pai stares in disbelief. The FCC partnered with Walt Disney Company to develop seemingly impossible technology that defies basic electromagnetic spectrum physics. Disney’s stock was up 84% when it opened this morning, but trading was immediately halted to allow investors to assess the news of the spectrum alternative’s impact. Enlarge

The nation’s media was quick to note last week that FCC Commissioners, normally incessantly microblogging their Twitter followers with FCC information and what they believe are cultural consciousness must-reads on every imaginable subject, haven’t tweeted once since last Tuesday.

An exclusive report this morning by Emmet T. Witllinger of POLITICO’s Morning Tech uncovered why.

The federal agency has been feverishly working on an announcement expected tomorrow unveiling a breakthrough technology that will replace the need for billion-dollar spectrum bids and kayo a bi-partisan bill introduced by a group of Senators last week to prevent the federal government from nationalizing 5G airwaves since spectrum management now appears to be a non-issue.

According to Wittlinger,  the FCC partnered with Walt Disney Company to develop the technology that defies basic electromagnetic spectrum physics.

Although most scientific discoveries come about after painstaking goal-oriented lab work, the spectrum alternative was a result of analyzing a reoccurring statement by Commissioner Brendan Carr during his dozens of speeches throughout the U.S. promoting 5G and how the FCC can assist in rolling it out.

“When people look down at their smartphone they just assume it’s pixie dust or magic that makes it happen,” Carr said last February in Texas at a wireless infrastructure manufacturer’s tour and during two other stops the same day.

Wittlinger said an FCC staffer, instead of rewriting Carr’s 5G stump speeches, discovered that by neutralizing contaminants in dust that they could be used to transmit radio waves.

Disney was reportedly asked to partner with the FCC, according to Wittlinger who uncovered an FCC research document that read: “Dust has endocrine disruptors such as poisonous phthalates, but the particles we will use have no contaminants. However, that would be a hell of a sell since we still battle the health-risk tin hats and their commerical charlatans. Disney’s  ‘Pixie Dust’ is the perfect marketing tool. It’s got panache, believability and Tinker Bell is subliminally aligned with the endearing Ma Bell.”