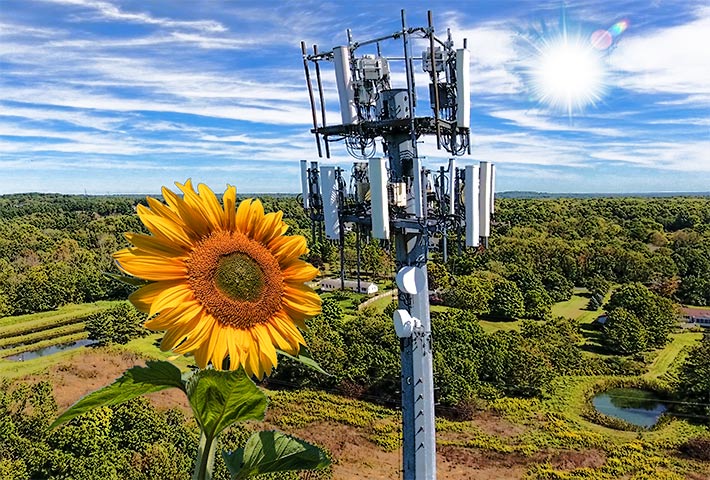 BENDING UNDER THE INFLUENCE – A 192′ monopole can easily bend by as much as 18″ from plumb. As sunflowers follow the sun, a monopole’s top will move away due to sun-induced thermal expansion.

Many of us have seen and experienced the Sunflower Effect. Most of us remember the first time we pulled up to a monopole and saw a severe case of it. It seems as if the pole is leaning or is damaged in some way. However, upon further assessment it appears that there is no damage and as the day goes on the pole seems to magically straighten out, almost as if the pole has a mind of its own. 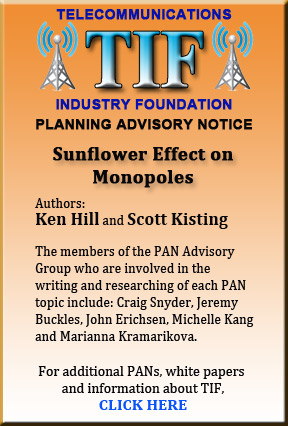 Why is this happening, does it cause harm to the structure, can it be avoided?

This Planning Advisory Notice (PAN) seeks to address these questions and raise awareness about the thermal growth effect of steel.

We need to start by understanding the thermal growth effect of steel. It is one of steel’s physical properties that can make for challenging engineering and maintenance assessment. While steel is a great building material, the engineers who design steel structures need to account for the thermal expansion and contraction effect of the material.

Steel has a thermal expansion coefficient of 6.5×10-6 per inch per degree °Fahrenheit. Manufacturers of towers applying ANSI/TIA-222-H and the IBC must take this into account.

In basic terms, as the steel heats up and cools it grows or shrinks due to its elasticity. As an example of how this can be calculated, the Eiffel Tower in Paris France is 984 feet tall and during the course of a year can grow and shrink by around ½ foot due to the effects of the sun with a temperature range from 14 degrees Fahrenheit to 104 degrees Fahrenheit .

On a cold winter day with the temperature at 14˚F, the Eiffel Tower is 984 feet tall.

How tall is it on a hot summer day when the temperature is 104˚ F? The Eiffel Tower is made from steel with a thermal expansion coefficient of α=(6.5×106 )/˚F, therefore the tower will grow 6.9 inches.

On monopoles, the Sunflower Effect, sometimes known as ‘Sun Camber’, is more noticeable because not only will the tower grow in height, but the full sun side will grow at a different rate than the shaded side of the tower, thus the tower will bend away or camber from the sun. 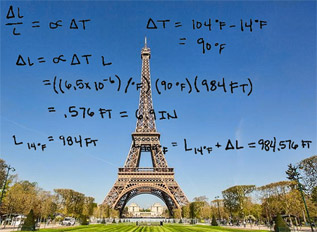 LET’S GET PHYSICAL – Temperature changes will see the Eiffel Tower grow 9.6 inches, but unlike a monopole it will not bend.

As the sun position changes during the course of the day, the tower will cycle through this event with the camber tracking away from the sun from dawn to dusk. Using the same equations as before, but accounting for the thermal differential it is easy to calculate that the sun side of a 200’ monopole could elongate/expand approximately ½” +/- more that the shaded side, which causes the pole to take on its characteristic curvature away from the sun.

We do not see the Sunflower Effect on self-support or guyed structures due to the geometry and the lack of full sun/shaded surface area. A self-support or guyed tower will expand and contract just like the Eiffel Tower, but will not suffer the same visual curvature that a monopole presents.

As you can see in figures 1 and 2 this effect has been verified by watching a 192’ monopole and recording the camber during a day where it was monitored from the ground and with a UAS (Unmanned Aerial System).

An excellent primer for planning and zoning officials

At first light the tower was plumb, but as the sun rose on the horizon and ambient temperature increased, the top of the tower moved away from the sun by as much as 18” from plumb.

This helps explain why some monopoles appear to be out of plumb, but when you go back later at a different time of day they look straight. This is an important concept for planning and zoning officials to understand as all good maintenance and condition assessment programs this take into account and that is why plumb, is not normally checked other than at the base flange of a monopole.

Safety climb could be compromised

Safety climbs are another area of the structure that are affected by thermal expansion. The primary impact is on the tension in the wire rope. For self-support towers, it will cause the tower to increase or decrease in height at a rate that may be slightly different from that of the wire rope and is dependent upon a number of factors such as shade, full sun, wind direction and ambient air temperature.

Even though the wire rope tension will vary during the course of the day from this thermal effect, it will expand and contract at rates similar to the steel in the tower. The same is true of coax, fiber and hybrid lines on the outside of poles, but because they are constructed from other materials they will expand and contract at a slightly different rate than steel. 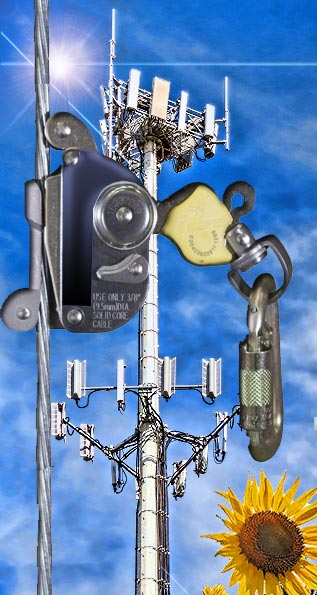 Although wire rope tension will vary during the course of the day, it will expand and contract at rates similar to the steel in the tower, but the safety climb system should be inspected prior to use

As with the self-support and guyed tower the lines on the outside of the monopole are supported by hangers. These hangers require additional assessment when inspecting to ensure they have not been improperly stressed due to the Sunflower Effect. The lines on the inside are normally supported by a properly used and hung hoisting grip allowing the line to float inside a pole. (Note: There are a small number of monopoles that have been guyed as a part of their design. The impact of the “Sunflower Effect” must be considered as it will require proper assessment of the guy tension like on a guyed tower.)

Some systems sport a spring assembly for tension

As mentioned before, the bending of the monopole will often decrease the wire rope tension on the shaded side if the manufacturer has not accounted for this effect in the design of the safety climb system. Some Safety Climb System manufacturers have designs to help account for this in their products. This is most commonly accounted for with some type of spring assembly at the top or bottom of the tower to maintain a minimum tension in the system and to account for the thermal expansion and contraction of the tower.

The variation of tension caused by the Sunflower Effect on the wire rope safety climb is yet another reason that the safety climb shall be inspected prior to use as per ANSI/ASSP A10.48 and the competent person shall use this standard to ensure the system is tensioned properly. They should also be aware of the SEMC (Safety Equipment Manufactures Consensus) document.

RF down-tilt should be monitored 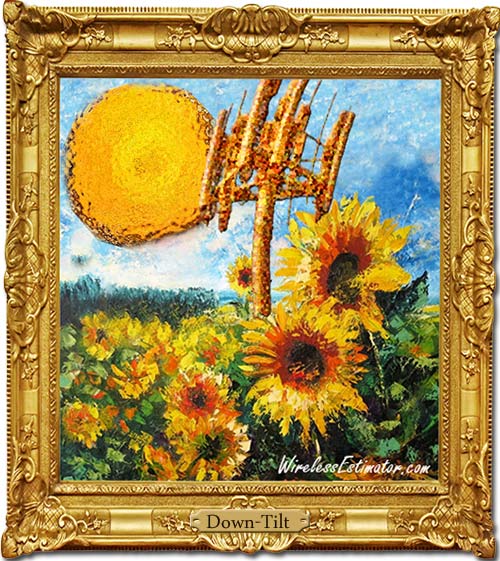 The Sunflower Effect can and will have an influence on the camber of a monopole and the telecommunications RF engineer may need to monitor the performance of the antenna systems knowing that the antenna down-tilt may be slightly affected during the course of the day, especially in the morning or during periods of heavy clouds and then sun. It all depends upon the sun angle, cloud cover and the temperature rise during the day.

In conclusion, if a tall monopole tower seems to be leaning a bit, it might actually be under the influence of the Sunflower Effect. Before you start panicking, check the base flange and anchor rods for plumb. Then consider a return visit at first light or near dusk to see if the tower was simply experiencing the effects of thermal expansion in the steel.