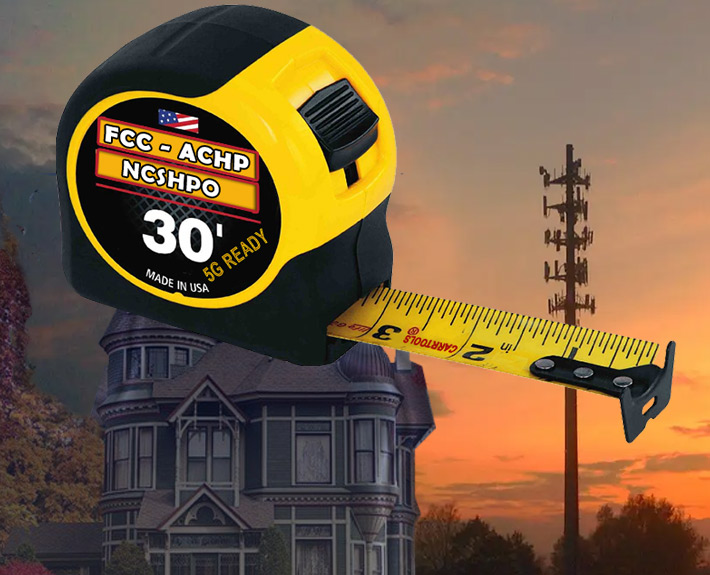 It does so by amending the Nationwide Programmatic Agreement for the Collocation of Wireless Antennas (Collocation NPA) that the FCC, ACHP, and NCSHPO entered into in 2001.

The Collocation NPA establishes streamlined reviews for infrastructure projects covered by that agreement. The amendment updates the review process for collocation (or adding wireless equipment at existing tower sites.

Previously, a collocation project that involved any excavation outside of the current tower site would not qualify for the streamlined review process established by the Collocation NPA. That conflicted with the streamlined review process that applies when providers are taking down and replacing a wireless structure—a process that allows for deployment and excavation up to 30 feet outside of the existing site.

Today’s amendment resolves that inconsistency by bringing the Collocation NPA into conformance with the tower replacement review. Streamlining small site expansions is critical to the buildout of 5G and to ensuring infrastructure resiliency. Providers increasingly are adding mobile edge computing capability and backup power to tower sites, which often require small site expansions. With today’s agreement, the FCC, ACHP, and NCSHPO are helping to upgrade service while encouraging the re-use of existing wireless towers, as opposed to incenting the buildout of redundant structures.

“This is a vitally important agreement to ensure our infrastructure policies can meet the challenges and opportunities of 5G,” said Commissioner Brendan Carr, who has led the Commission’s wireless infrastructure modernization efforts. “It represents a commonsense approach to encouraging collocations where tower replacements are not necessary. The FCC team and our partners at ACHP and NCSHPO worked closely, and I want to extend my thanks and appreciation for the time and good-faith efforts that enabled us to reach this agreement.”

Two thumbs up from NATE and WIA
“On behalf of NATE’s 1,000 member companies nationwide, we applaud Commissioner Carr and his colleagues at the FCC for proactively collaborating with officials from the ACHP and NCSHPO to come to terms on this common-sense agreement,” said President & CEO Todd Schlekeway.

“The agreement is a win-win for NATE member companies, the wireless infrastructure industry and the historic preservation community. In particular, the Association is pleased that the agreement accounts for the realities of next-generation site activities and encourages facilitating collocation on existing structures. It is essential that we as a nation commit to facilitating tower modification without excessive regulatory mandates as a critical means of closing the digital divide and enhancing communications capabilities throughout the country,” added Schlekeway in a statement.

“WIA and the entire wireless infrastructure industry are elated that this successful collaboration will harmonize the rules so collocations on existing tower sites are allowed similar ground space expansion rights as permitted to the tower structure. This further clears the way for new wireless infrastructure to get upgraded quickly and efficiently in the race to 5G,” said WIA Chairman David Weisman, Chief Executive Officer, InSite Wireless Group, LLC.

“This tremendous collaboration between the FCC, the ACHP, and NCSHPO is a breakthrough in the wall of obstacles to 5G. This action is the result of many years of diligent work by the agencies to promote using existing sites to accelerate broadband deployment and to upgrade networks to 5G services,” said WIA President and CEO Jonathan Adelstein.

“When combined with the FCC’s proposed compound expansion rulemaking, the road is cleared for the siting of generators, mobile edge computing, carrier collocations, competitive operator equipment, and more. In tandem with the rulemaking, it removes federal and local roadblocks for siting the equipment needed to maximize the benefits of 5G in the U.S. and win the global race to 5G.”

Many tower sites, some of which have stood for decades, no longer have the physical space on the ground to house critical equipment like backup generators for public safety or edge data centers and other new equipment necessary for 5G networks. These updates from the FCC, ACHP, and NCSHPO will allow for minimal expansions of the physical space at the tower site, which will allow for the placement of equipment needed to expand 5G and connectivity, WIA said in a statement.