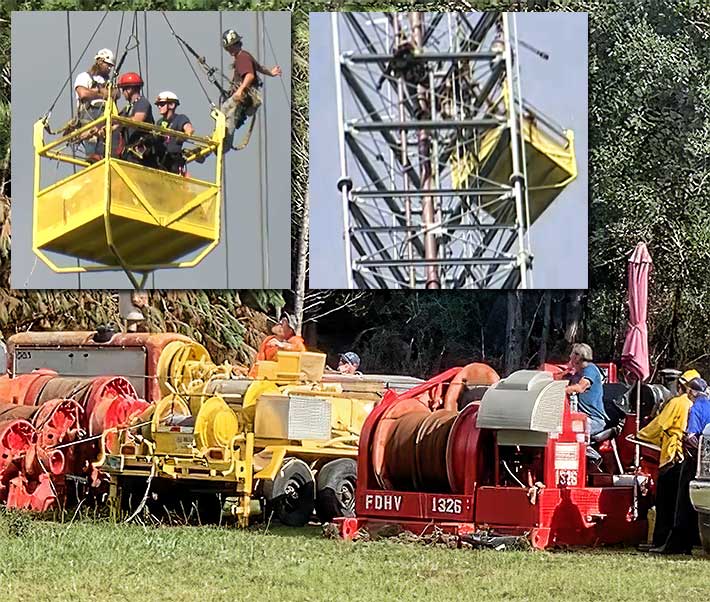 Although emergency rescue officials congratulated their men for “climbing” the tower and rescuing the two co-workers and retrieving the deceased’s body, news videos appear to show that Broadcast Construction Solutions’ hoist operator and riggers performed most of the rescue and recovery efforts. Main photo: NBC 15, Inset: Fox 10 video screen shot. 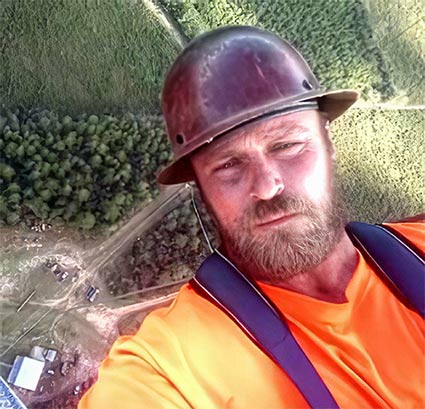 Wireless Estimator has confirmed that the deceased broadcast worker is Sirous Snider, 33, of Burleson, Texas, a well-respected and popular poster on Facebook.

Loxley Fire Battalion Chief Will Ervin described the incident as an equipment “malfunction.”

He said that the worker got caught up in some equipment and fell part of the way down the tower and his two-coworkers secured his body to the guyed tower until a recovery effort was performed at about the 1,300-foot level.

Baldwin County Sheriff Huey Mack said in a press conference that there “was some debris that may have struck one of the individuals.”

Although the media ran with that presumption, it appears to be inaccurate in addition to Mack stating that the tower was 3,000 feet tall.

Multiple news reports said that the incident was caused by a rigging failure, but an individual knowledgeable of the fatality said that was incorrect. He said the accident occurred when the crew was installing the last wire of new guy wires.

The 2-3/8” guy wire might have gotten away from the workers, severely striking Snider.

Snider’s two co-workers were brought down in a man basket. Only one received minor injuries not requiring hospitalization, according to authorities.

Mack said that one of the men on the tower contacted emergency services but initial respondents didn’t realize the gravity of the incident until they arrived.

Sixty personnel representing 13 agencies responded to the accident. A sheriff’s deputy tried to use a drone to view the worker entangled in the tower but could not get it to rise over 500 feet.

Wireless Estimator will provide additional details when they become available.

The Tower Family Foundation and Hubble Foundation have reached out to support Snider’s family.