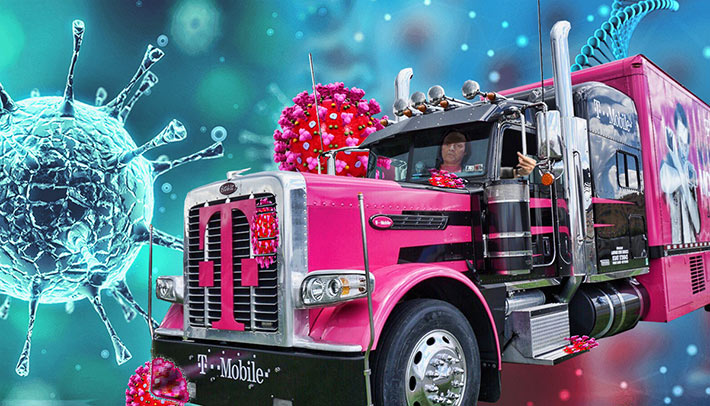 “The New T-Mobile has repeatedly and emphatically claimed that as a direct result of the merger, it would have the necessary resources to deliver 5G to millions of square miles of the U.S. and hundreds of millions of Americans, including those living in and traveling through rural America,” the letter says. “[T]o the extent there will be additional stimulus recovery measures Congress needs to make sure T-Mobile does not receive funding as a corporate handout to meet commitments it already made based on synergies that it lauded to get its deal done.”

The groups also point out that the FCC specified that its decision to approve the merger “would be conditioned on the network build out commitments of the licensees to provide 5G service to a large portion of the U.S. population, including rural areas.”

“Congress must hold the new T-Mobile accountable for the promises it made to ram the merger through the approval process,” said CWA Director of Government Affairs Dan Mauer. “T-Mobile promised that the merger would give the company the resources to build out 5G to nearly the entire U.S. population, including rural areas. COVID-19 recovery funds should be used to address the crisis caused by the pandemic, not as a corporate handout to help the new T-Mobile fulfill the promises the company was eager to make to push this merger through.”

“On April 1, 2020, on his first day as CEO of the ‘New’ T-Mobile, Mike Sievert said: ‘We’ve had eight quarters of blockbuster results during the pendency of this merger of T-Mobile, and nothing has changed in our long term thesis — this is about bringing together these two companies and the uniquely positioned assets of the two, to unlock the potential of massive scale, and invest that, the synergies from that massive scale into creating the world’s best 5G network.’ Even amid the COVID-19 crisis and resulting global economic turmoil, T-Mobile acknowledges that the synergies it gains with the Sprint merger means that it does not need any type of economic assistance from the U.S. government. RWA has come to the same conclusion and urges Congress to allow this new behemoth to stand on its own without government support,” said Carri Bennet, General Counsel for the Rural Wireless Association.

“T-Mobile’s takeover of Sprint will mean fewer choices and higher prices for people who need essential communications services,” said Free Press Action Vice President of Policy Matt Wood. “Hundreds of millions of people are struggling right now due to the COVID-19 pandemic and economic crisis, and Free Press Action has called on Congress to provide billions of dollars in funding to keep people connected to the internet while they’re staying home and trying to stay online. But while increased public investment in broadband connectivity and affordability is exactly what the country needs at this moment, T-Mobile certainly does not need and should not get any taxpayer money just to keep the overblown promises it made to sell its merger.”

“T-Mobile has promised the government that its anti-consumer, anti-worker merger with Sprint will reap benefits for the public,” said Joshua Stager, Senior Counsel for New America’s Open Technology Institute. “Congress must hold T-Mobile accountable for these promises, and that includes ensuring that T-Mobile receives no taxpayer money to fulfill these promises. T-Mobile is already in a position to raise prices and stifle competition—they don’t need corporate welfare to boot.”

For nearly two years, T-Mobile argued that as soon as it could join forces with Sprint, it would be in a position to compete effectively against AT&T, Verizon, and other telecom and cable industry giants by offering numerous “compelling public interest benefits” to America’s broadband consumers. New T-Mobile made the following merger-specific buildout commitments to expand coverage and increase download speeds to rural America to convince the Federal Communications Commission and the U.S. Department of Justice to approve the merger: