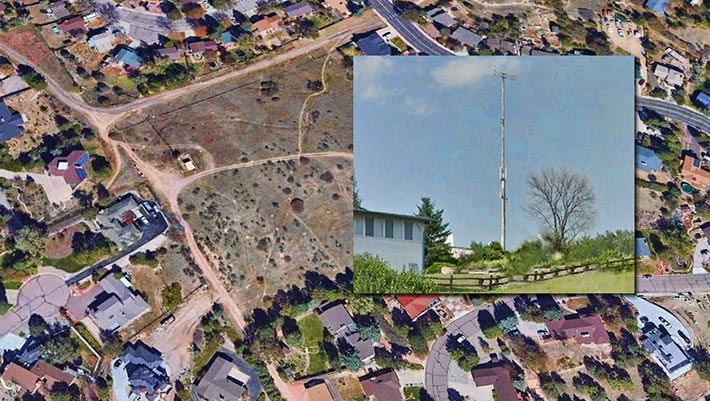 The monopole was an existing structure since at least 1972, long before homes were built after the area was rezoned to residential; however residents protested retrofitting the structure, even though it was identified that its height and general footprint would not change.

Vertical Bridge Development, LLC has filed a complaint with the U.S. District Court for the District of Colorado for a ruling that the City of Colorado Springs is violating federal laws by not allowing the company to modify an existing tower that does not substantially change the physical dimensions of the tower.

According to the complaint, Vertical Bridge manages a 99-foot monopole located off of Avondale Circle owned by CenturyLink that was constructed  around 1972.

It sits on a five-plus acre site owned by CenturyLink that was previously owned by public utility Mountain States Telephone and Telegraph dating back to 1956.

In 1968 the City annexed the surrounding area and zoned it residential and an neighborhood engineering plan filed with the City  listed the public utility site as including “radio towers”.

Vertical Bridge said that on February 28, 2019 it applied to the City’s Planning Commission to retrofit the structure in order to support collocation of new transmission equipment and that it would not substantially change the structure.

On September 13, 2019, acting on a neighbor’s administrative appeal and after the local neighborhood – the majority whose homes were built when the tower was present – mobilized against Vertical Bridge’s application, the full Planning Commission overturned its staff and denied the permit.

Vertical Bridge appealed that decision before the City Council and on November 12, 2019 the City Council rejected the permit, stating that the long-existing tower was not really an “existing” one because the City had not granted it land use approval originally, and/or any prior lawful

nonconforming use was abandoned under the municipal zoning code when the owner stopped using the tower for telecommunications purposes; and the proposed modifications would “substantially change” and “replace” the tower.

Vertical Bridge said that the structure had housed telecommunications equipment licensed by the FCC as late as 2016.

The City has until February 6, 2020 to answer Vertical Bridge’s complaint.