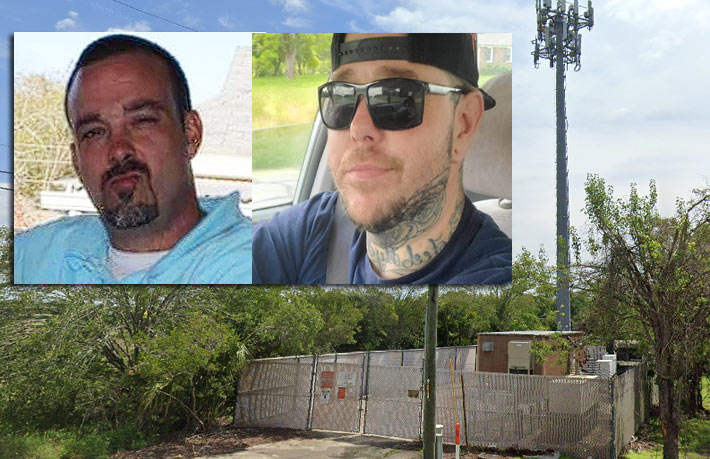 Co-owner of Harley and Sibs Logistics LLC Phillip Franklin Harley, left, and his co-worker Michael Thomas were shot to death inside an AT&T equipment shelter. Harley’s mother made the gruesome discovery when she went to check on the two men.

For the three team members of Harley and Sibs Logistics LLC of Thomaston, GA, last week’s scopes of work required them to install power plants, batteries and equipment at three AT&T cell sites, a project that the company has performed many hundreds of times in the past. 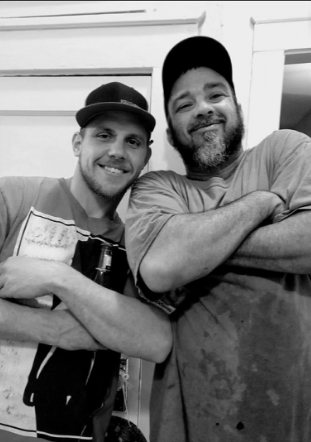 Guy Robinson, left, and Phillip Harley were best friends and business partners. Robinson is putting up a $5,000 reward for information leading to the arrest of those responsible for the death of Harley and coworker Michael Thomas at a cell site in Jacksonville, Florida.

After picking up the equipment in their rented Penske box truck at a logistics facility in Orlando, FL, they drove another two and one-half hours northeast to their first location on the west side of Jacksonville.

On Wednesday night, June 17. 2020, the company’s co-owner, Phillip Harley, 37, and recently hired employee Michael Thomas, 33, both from Georgia, unloaded the equipment and began their assigned tasks at around 10:00 p.m.

Their CDL driver, Harley’s mother, Katheryn English, assisted but then returned to the cab to get some well-deserved sleep.  She had been up many hours driving and assisting both men in loading the equipment, according to Harley’s partner, Guy Robinson, who remained in Georgia due to a medical condition.

In an interview with Wireless Estimator today, Robinson said that Mrs. English had set her alarm for 5:30 a.m. the next morning to see if they needed any assistance to ensure that the site was up in order to meet AT&T’s maintenance window, and when she walked inside the equipment shelter she witnessed the unthinkable, her son and Thomas on the floor, victims of a shooting.

The Jacksonville Sheriff’s Office (JSO) said that they received a call around 6:00 a.m. that two individuals were found to be “unresponsive” at the cell site location.

A JSO sergeant later identified that both men had been shot multiple times. Harley appeared to have been on a ladder when he was shot.

The Penske truck was parked inside the fenced in compound with its cab extending outside of the open gate.

Industry observers agree that it is logical that someone sleeping inside the cab would not hear gunshots in the concrete shelter since the wall mounted commercial air conditioner near the back of the truck was most likely running and the entrance door was on the back side of the structure.

The Crown Castle-owned tower site reportedly does not have any surveillance cameras, and the Dollar Family store diagonally across the street where an armed robbery occurred on June 16 at 7:00 p.m., according to public records reviewed by Wireless Estimator, does have surveillance cameras, but they do not cover the cell site which is highly visible at the intersection of Firestone Rd. and Morse Ave. which has a traffic light.

Robinson said that Harley had been on his cell phone at 3:16 a.m. so the shooting had to have occurred sometime during the following two and one-half hours before Mrs. English’s discovery.

After immediately driving to the site, he informed authorities that it appeared that equipment had not been stolen, but the shooter may have taken money from Harley’s wallet since he would often carry at least $2,000 on the road to address unknown expenses and it was not with him.

JSO has not identified whether there were multiple shooters.

Robinson, who has been working with Harley for approximately six years,  said that night work is inherently dangerous, but he never expected that his partner, and most importantly his best friend, would be shot while at work.

“I’ve been in many places working at night – ghettos and slums – but this place didn’t look too bad. I wish we had been informed about the armed robbery a night earlier,” Robinson said, clearly distraught over the shooting.

Robinson said he did not know Thomas because he had just recently been hired by Harley, but offered his condolences to his family and friends.

“I’m going to be putting up a $5,000 reward for anyone who provides Crime Stoppers with information that results in the arrest of the person that did this,” Robinson said.

Funeral services will be announced for Harley as well as Thomas when they become available. A relative of Thomas informed Wireless Estimator that he was not married.

A GoFundMe drive has been set up for Phillip Harley and Michael Thomas.