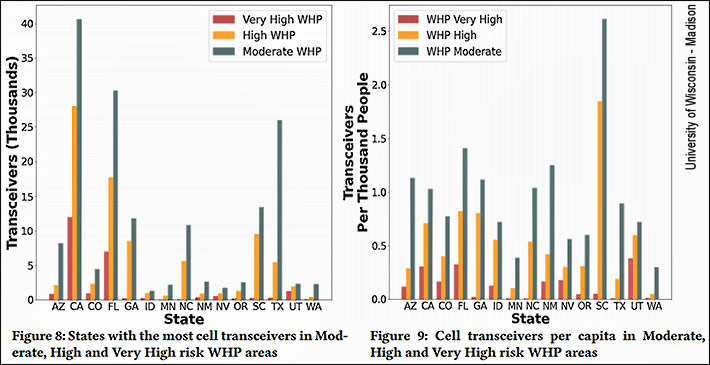 While the FCC attempts to get accurate maps of broadband coverage in the U.S., three University of Wisconsin – Madison researchers have completed the task of identifying for the agency the vulnerability of cell sites throughout America when confronted with wildfires.

The study, presented at a meeting of internet network researchers this week found more than 430,000 cell site transceivers covering approximately 85 million people are in areas the U.S. Forest Service considers at moderate or high wildfire risk.

The research of Scott Anderson, Carol Barford and Paul Barford was supported by grants from the National Science Foundation and Department of Homeland Security.

According to Paul Barford, a UWM professor of computer science, the study provides a roadmap for cell service providers to make assessments, allocate resources and take steps to make their infrastructure mor resilient in the face of wildfire threats.

The researchers worked with historical records of wildfires, and matched the Forest Service’s map of Wildfire Hazard Potential to a crowdsourced database of cellular network equipment locations from OpenCelliD.

The researchers found wide variability in the number of cell transceivers that were within wildfire perimeters over the past 18 years.

In a focused analysis of the California wildfires of 2019, they found that the primary risk to cellular communication is power outage rather than cellular equipment damage.

“Our analysis of future risk based on wildfire hazard potential identifies California, Florida and Texas as the three states with the largest number of cell transceivers at risk. Importantly, we find that many of the areas at high risk are quite close to urban population centers, thus outages could have serious impacts on a large number of cell users. We believe that our study has important implications for governmental communication assurance efforts and for risk planning by cell infrastructure owners and service providers,” they said in their report.

In 2018, they identified that there were 58,083 fires that burned 8.8 million acres where there were 3,099 transceivers within the wildfire perimeters.