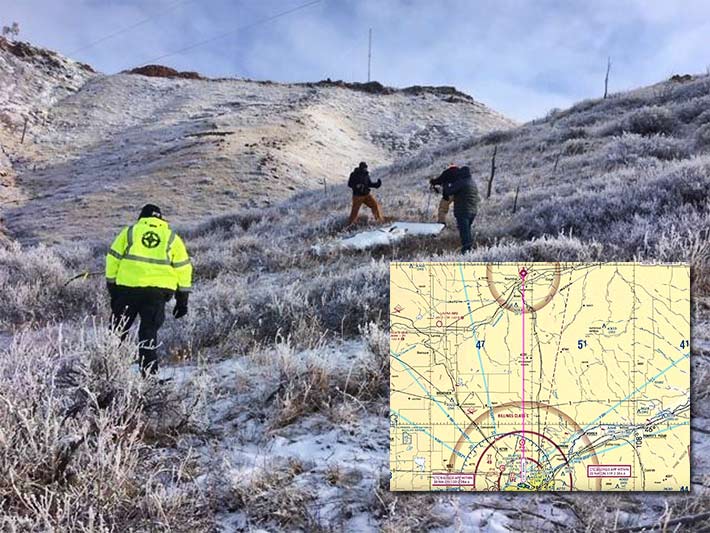 Investigators inspect wreckage from the Cessna that crashed on Dunn Mountain. The pilot had been heading from Billings to Roundup when he crashed. An aeronautic chart does not show the 185-foot guyed tower that he hit.

January 14, 2020 – Four Billings, Montana men were killed Saturday in a plane crash when the pilot reportedly hit a communications tower near Dunn Mountain north of Billings.

According to authorities, the single-engine Cessna 183 crashed about 6:00 p.m.

Yellowstone County Sheriff Mike Linder said that the plane clipped a guy wire and also hit the 185-foot communications tower that is used by local law enforcement as well as the Sheriff’s Office.

At 3:10 a.m. Sunday, an initial alert came in stating that the aircraft was missing, according to the Federal Aviation Administration.

On Sunday morning Linder went up in a helicopter and he and the pilot located the crash site near the bottom of a slope on the west face of Dunn Mountain. When they landed they found no survivors.

The tower is not listed in the FCC’s database, and according to a local flight instructor, it is not located on an aviation chart for the area.

The coroner identified the pilot as David Healow, 69, and his passengers as Rusty Jungles, 36; Mikel Peterson, 35; and Raymond Rumbold, 32, Linder said in a statement.