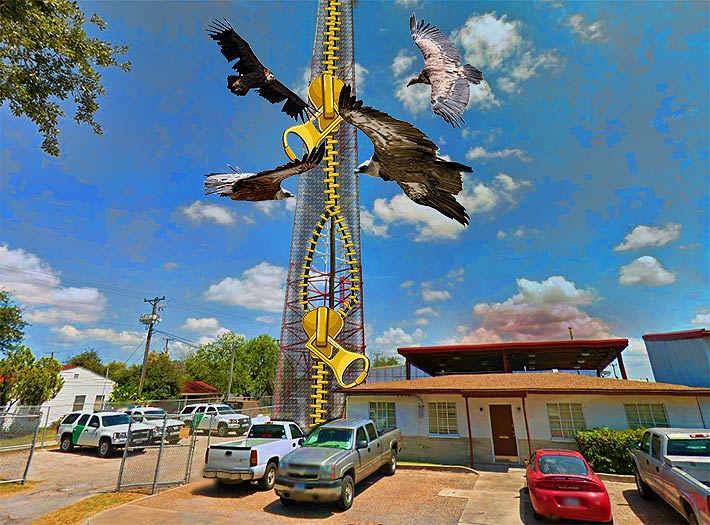 Customs and Border Protection officials want to permanently remove over 300 vultures that have called Kingsville, Texas home for many years by keeping them outside of a zippered tower cage.

Federal officials are asking the industry to rescue a Customs and Border Protection self-supporting tower that has been taken over by 300 vultures in Kingsville, Texas.

They’ve issued a Request for Information (RFI) to obtain viable sources of supply, industry practices and answers that will assist them in providing what they believe will be a deterrent – a 320-foot tall netting solution that might be wishful thinking to keep the birds off the structure and allow for a pristine vulture vomit-free tower. 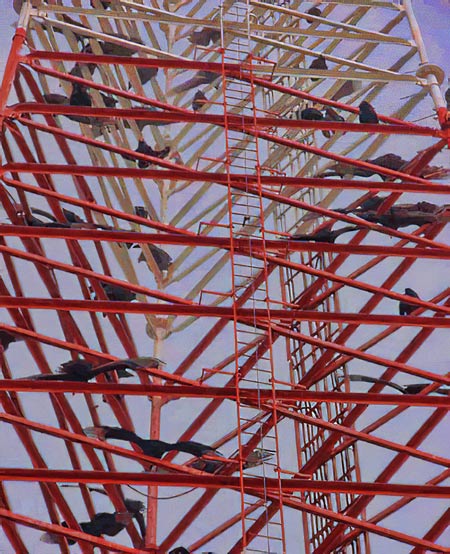 Once the RFQ is released and awarded, the contractor will have 120 days to complete the vulture deterrent skirt on this 320-foot tower that has upwards of 300 vultures. If the net is successful, it is not known where the vultures will roost unless a neighboring community is more accommodating and provides a sanctuary tower. (U.S. Customs and Border Protection Photo)

The completed netting must be wrinkle-free and have no noticeable waves, and it must be minimally visible which could cause a problem for inattentive vultures or other birds.

Raptor reducing responders will also need to provide a 10-year warranty in their RFI that is due by January 30, 2020.

The protective skirt with an 81-foot hemline must have two zippered openings at the 60’ and 200’ levels to allow access for tower techs.

The netting cannot interfere with an exterior face climbing ladder and the agency is asking whether there is any off the shelf net system that is available on a GSA schedule.

If there are only two openings being required, it is unknown how a tower tech would be able to traverse or work on any face of the structure.

In addition, since the mesh has to be sized to prevent the smallest avian from entering so that there is never a need to rescue an incarcerated wren, it might be necessary to identify if the self-supporting tower will be overloaded – which could be difficult to analyze using TIA-222-H.

The tower is not listed in the FCC’s database.

“A population of vultures have built up and are roosting and nesting on the tower structure on the railings, catwalks, supports, and on rails and conduit throughout. Droppings mixed with urine are on all of these surfaces and throughout the interior of the tower where workers are in contact with it, as well as on areas below,” the RFI, available here, reads.

The CBP said it anticipates installing the netting system this August in order to have the system in place before the natural heavy vulture roosting period during the fall months.

It will be interesting to see what workable solutions the agency receives.

As a defense, vultures “regurgitate a reeking and corrosive vomit,” according to a factsheet from the US Department of Agriculture (USDA). This kills bacteria on the birds’ legs, but also eats away at the metal in radio towers, reducing the life of the structure and making it unsafe for the maintenance workers who climb it. Vulture droppings can also carry a range of diseases such as histoplasmosis, salmonella, and encephalitis.