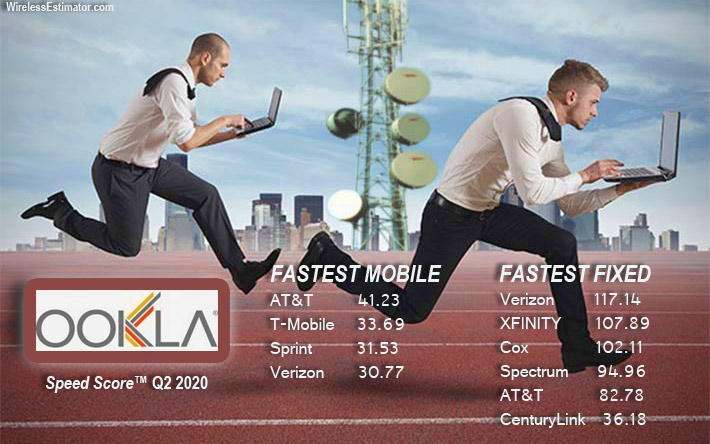 Although AT&T had the fastest network, T-Mobile had significantly more 5G coverge than the nation’s other operators combined.

The reliable Q2 2020 Speedtest United States Market Report by Ookla, based upon data from over 1.6 million unique mobile user devices and 18.9 million fixed broadband devices, shows that AT&T is the fastest and most consistent mobile network, but T-Mobile has the competition beat on 5G availability.

Ookla said it saw a decline in mobile and fixed broadband download speeds in early March as consumer behavior shifted in response to the pandemic, but speeds have since rebounded.

Reporting on 5G, Ookla said that all major U.S. operators were focused on implementing 5G over the past year and AT&T continued to roll out its millimeter wave “5G+” network in parts of major cities. In addition, AT&T repurposed its 850 MHz low-band spectrum, previously used for 3G service, in parts of 30 states to offer improved 5G coverage.

In June 2019, T-Mobile launched their millimeter wave 5G in parts of six markets, followed by the nationwide rollout of 5G in the 600 MHz band to cover more than 200 million users. With the successful completion of the Sprint merger, T-Mobile accelerated the rollout of 5G in the 2.5 GHz band, which became commercially available in Philadelphia and New York City.

As of July 8, 2020, there were 5,165 commercially available 5G deployments in the U.S. according to the Ookla 5G Map™. T-Mobile had the majority of these deployments with 5,008. AT&T had 355 deployments and Verizon Wireless 39. While Sprint did show 5G results during Q2 2020, T-Mobile has since shut down those sites. The number of T-Mobile 5G deployments suggests that they had significantly more 5G coverage as of Q2 than the other operators combined.

You can read Ookla’s full report for full rankings in all fifty states and the 100 most populous cities in the country. They also include data on providers’ performance in states and major cities.