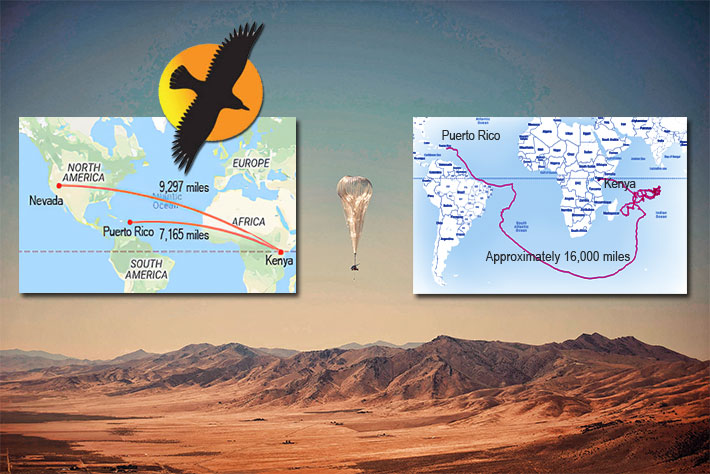 YOUR LOON BALLOON’S FREQUENT FLYER MILES MAY VARY – A Loon balloon launched from Puerto Rico to Kenya took a circuitous route, dictated by data collection needs, weather patterns and forecasts. Loon, a unit of Google’s parent company Alphabet, can launch their balloons from facilities in Puerto Rico and Nevada.

Loon’s airborne armada of balloons started delivering internet service to Kenya on Tuesday, ensuring online service to tens of thousands of people in the first commercial deployment of high-altitude cell sites. Loon expects to have 35 or more balloons in their fleet following additional testing. 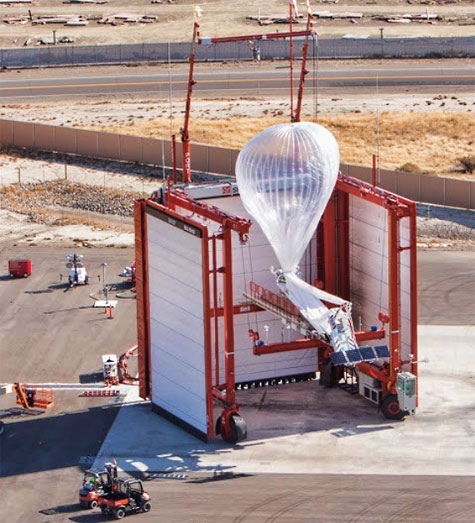 Loon’s launch system has three wind walls and can be rotated so the opening where the balloon drifts out always faces downwind, ensuring the balloon is always sheltered from the elements. A custom apparatus fills the balloon with lift gas inside the launch system. Photo: Loon

Loon, a division of Google’s parent company, Alphabet, harnessed its technology to balloons providing internet service to remote areas of Kenya in conjunction with Telkom Kenya.

It’s the first commercial balloon-powered internet to launch in the world, although the balloons have been in testing for at least nine years and were put into emergency service in Puerto Rico in collaboration with T-Mobile and AT&T when cell sites went down following Hurricane Maria’s devastation in 2017.

The balloons, powered by solar panels, float in traffic patterns about 12 miles up in the stratosphere — well above commercial airplanes — will initially provide a 4G LTE network connection to a nearly 31,000-square-mile area across central and western Kenya, including the capital, Nairobi, according to Loon.

The joint venture is being closely watched by telecom providers in other countries as a test of whether the technology is reliable and the service can be profitable.

The service will be effective in Africa, where just over 28 percent of the continent’s 1.3 billion people were using the internet in 2019 — the lowest rate in any region worldwide — according to the International Telecommunication Union.

During a field-testing session in June within the service region, Loon saw an uplink speed of 4.74Mpbs, a downlink speed of 18.9Mbps, and latency of 19 milliseconds (ms). Subsequent tests used the service for all sorts of applications, including voice calls, video calls, YouTube, WhatsApp, email, texting, web browsing, and more.

The balloons, launched from Puerto Rico, have their route determined by software automation. Numerical weather forecasts are built throughout the day by weather centers around the world, and they assimilate the outputs of those models to create an ever-changing global estimate of how long it takes to reach their destination.

According to Loon, after their flights arrived in Kenya, they follow a carefully choreographed dance with their fleet management system’s machine learning-driven navigation algorithms coordinating all the movements.

The balloons perform a variety of maneuvers to maximize the number of people they are able to connect throughout the day.

Data from over a million hours of flight through the stratosphere allows Loon to build models of the winds and weather that help them improve their navigation system.