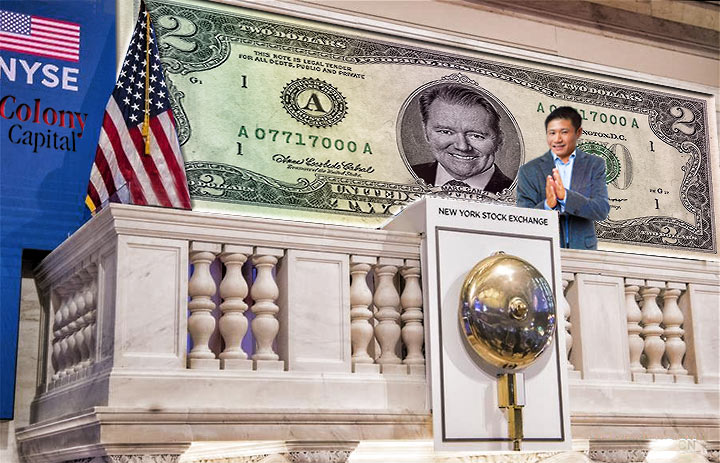 Colony Capital CFO Jacky Wu said the company has continued to make progress in its digital transformation, having increased digital assets under management to over 49%. President and CEO Mark Ganzi said Friday it’s the perfect stock to look at, reminding analysts of the how the towercos became Wall Street’s darlings today when at one time they were a sub $2.00 stock.

SBA Communications stock price closed at $311.28 Friday with American Tower’s stock at $257.61 and Crown Castle trailing at $168.19, but it’s still a price that cautious investors might shy away from during uncertain times.

However, well-known wireless infrastructure magnate Marc Ganzi has what he believes is a wise investment, a $2 stock which he’s convinced has huge potential — Colony Capital (CLNY) a company founded in 1992  that has over $46 billion in assets under management.

Ganzi took over the reins of Colony Capital on July 1 as President and CEO and held his first quarterly analysts call Friday where he outlined the company’s increasing acquisitions and focus upon a digital transformation of the company.

During the call, Ganzi asked analysts who’ve been investing in the wireless vertical sector for two decades, who’ve remembered “those sort of seminal moments when American Tower, Crown and SBA were all trading sort of sub $2.00. Those were really interesting points in time to buy digital infrastructure. Colony today trades slightly under $2.00. I’d encourage you guys to look at your history books, think about this management team, think about our business model, and think about where we’re going.”

Ganzi  emphasized that the California-based company’s merger and acquisition pipeline continues to be “robust with tremendous opportunities in towers and data centers on the horizon.”

“We’d be nowhere without our CEOs, and our key senior industry vertical experts, Ganzi said.

Last March, Jacky Wu joined Colony and in July was appointed as the company’s Chief Financial Officer and Treasurer.

Wu brings on board industry experience, having served at American Tower Corporation as its Vice President of Finance and Mergers & Acquisitions. He also spent eight years at Verizon Communications.

“This is an assembly of executives that are second to none that continue to own and operate on a daily basis for us 95 data centers, 135,000 fiber route miles, 350,000 tower sites, and 35,000 small cells. Once again, these are the individuals that helped form our thinking, create opportunities for us to help us solve problems. It’s incredible to have a deep bench like this. That helps us think through the operational complexities and the opportunities of tomorrow. We wake up every day with an exclusive focus on digital,” Ganzi said.

Ganzi said that Colony enables their customers to deploy digital infrastructure across all of the four core verticals, data centers, towers, small cells infrastructure, and fiber.

He said that Colony was not stuck in the macro build environment as some public companies are and they were executing on the network needs of their customers.

Last week, SBA Communications announced its second data center acquisition. Ganzi was the first vertical realtor to identify the need to invest in data centers and started acquiring them in 2016.

The great thing about investing in companies like Databank and Vantage, Ganzi said, “is it requires no G&A (general and administrative costs), zero G&A in fact, to manage those assets. We already have a 77-person global team that manages our digital investments for us.”

Colony’s Achille’s heel is its hotel property holdings which are performing poorly as a result of COVID-19.

However, Colony’s playbook is to move into digital and possibly shave their underperforming assets.

Ganzi said that Colony has had a lot of interest in their portfolio.

“There’s a lot of opportunistic real estate funds that see the value in this portfolio. Limited service hotels are the easiest to bring back online. They represent the fastest way to get cash flow in the sector. And so, this portfolio has value. And we will remain committed to recovering the value in the portfolio,” Ganzi said.