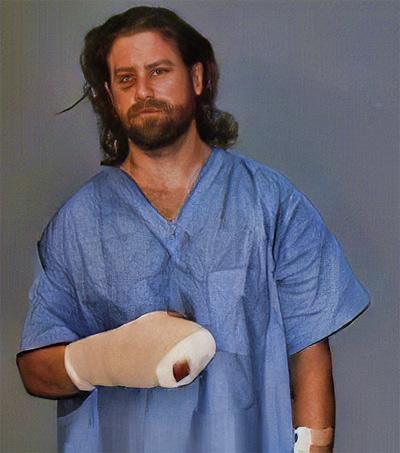 When Travis Barton tried to elude police, he was shot, but only suffered a finger wound. Photo: Texas Department of Public Safety

A Buda, Texas man who led multiple law enforcement agencies on a high-speed chase through Robertson and Leon Counties in Texas last week remains in custody in the Robertson County jail until he can post a $115,000 bond. He is also being sought by Fremont County, Colorado Sheriff’s officials for a dangerous drugs charge.

Travis William Barton, 38,  is charged with evading arrest after Robertson County Sheriff’s deputies, who suspected Barton of stealing copper from a cell tower, approached him, and Barton fled in his vehicle.

Leon County Sherrif’s deputies deployed spike strips that punctured Barton’s tires, causing him to crash into a sign in Centerville.

Deputies then began to shoot at Barton and a bullet struck his finger. It is not known whether Barton brandished a weapon.

At this time, authorities have not charged Barton with copper theft at the tower site.

The offense of evading arrest in a vehicle is a fourth-degree felony punishable by between 180 days and two years in jail and a fine of up to $10,000.

According to the Texas Department of Public Safety, Barton has been arrested numerous times for possession of marijuana and for multiple thefts, some involving scrap metal.