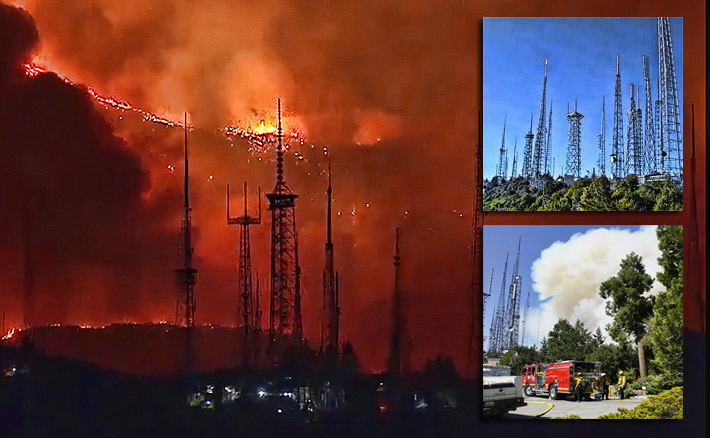 The Bobcat Fire licked at the compounds of Mount Wilson’s towers, but controlled burns and firefighters assisted in containing the wildfire that might have been started by Southern California Edison utility equipment

American Tower Corp. and InSite Towers’ management, and dozens of broadcasters, breathed out a collective but cautious sigh of relief early this morning as controlled burns around Mount Wilson in California appear to have kept at bay the Bobcat Fire that had made a renewed push to destroy the Mount Wilson Observatory and 29 communications towers.

As of 3:00 a.m. (PST), the Bobcat Fire appears to have been contained around Mount Wilson, according to firefighters. However, the fire could still race up the steep ravines as they did Tuesday after the fire appeared to be confined and the area deemed safe the previous Friday.

American Tower owns five structures on the north slope of Mount Wilson, which peaks at 5,713 feet. InSite Towers owns four towers that it acquired from Poole Properties Inc. in 2015.

Those structures were also put at risk in risk in 2009 when the Station Fire came perilously close to destroying them. Officials determined that the fire was caused by arson.

Federal officials are looking into whether the Bobcat Fire was started on September 6 when utility equipment owned by Southern California Edison experienced an issue moments before the fire was first reported.

Mount Wilson’s towers are used by most of the greater Los Angeles broadcasters. It is estimated that the towers and broadcasting equipment assets are worth well over $1 billion dollars.