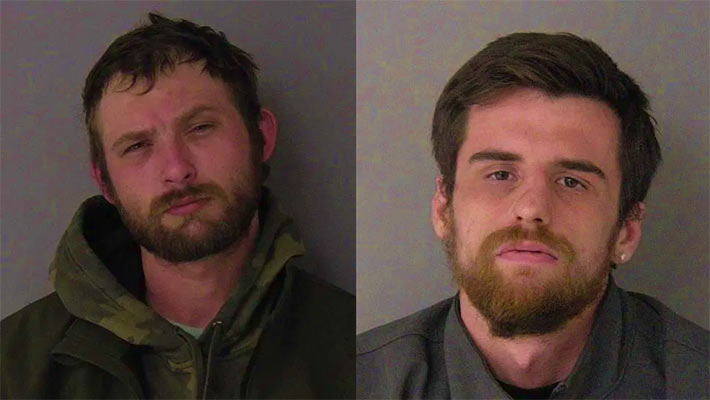 Two men were arrested after a break-in at a cell tower near Hernshaw, West Virginia, according to a press release issued yesterday by the Kanawha County Sheriff’s Office.

Thomas Bowles, 24, of Ashford and Christian Hunter McNeely, 24, of Costa were each charged with breaking and entering and destruction of utilities.

According to authorities, at 4:00 a.m. on October 8, 2020 deputies were dispatched to Bee Mountain Road near where a cell-phone tower site break-in was in progress.

When the first deputy arrived he saw flashlights in the woods being carried away from the site, and an ATV parked nearby was packed with stolen property and tools. One of the removed items was a radio amplifier that helps first responders communicate with dispatchers and one another.

A K9 Team was called to the area and began a track from the tower site through the woods, ending along Lens Creek Road. A detective with our Property Crimes Unit was patrolling the road during the K9 track.  He spotted Bowles who matched description of one of the suspects provided by the security staff who monitored the breaking and entering on surveillance cameras.

As the investigation continued another suspect was identified as McNeely.

“The damage to tower sites like this one pose a grave risk to those relying on cell phone communication for medical, fire, and law enforcement emergencies. This site damage also interrupted radio communications for the first responders who would assist those in need in the area,” Sheriff Mike Rutherford said in the release

Three tower sites are registered in the FCC’s database at the location, two belonging to Portapage and another by the Appalachian Power Company.