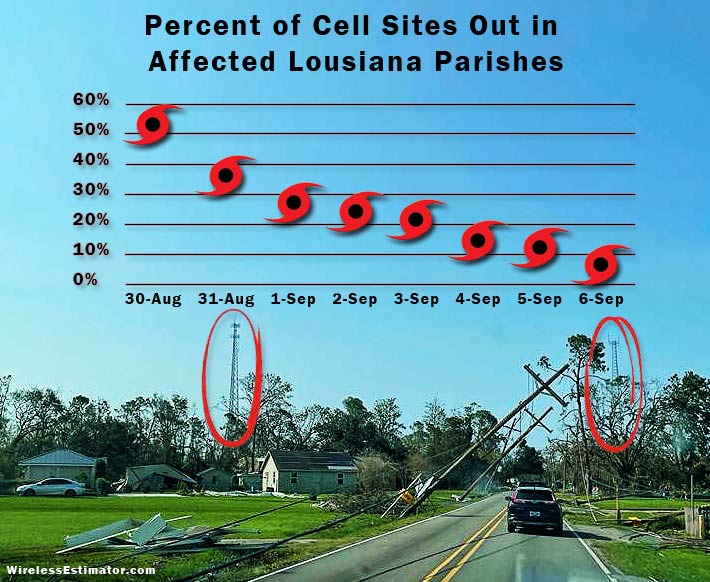 As fiber, wireline and cable subscribers saw considerable outages due to Hurricane Ida, cell site outages have been reduced to 8.7% in hard-hit Louisiana. Two towers in the background remain standing as other communications were trounced by Ida.

Yesterday evening’s Hurricane Ida FCC outage report saw a marked improvement of the number of cell tower outages in the affected areas in Louisiana, dropping to 8.7% from its peak on Aug. 30, 2021 of over 52%.

Communications outages for the Category 4 Hurricane will be later studied by the FCC for lessons learned, but a known fact is that towers remained resilient in weathering the winds for which they were designed.

Two of the four major tower owners reported to Wireless Estimator that they did not have any structures that collapsed from Hurricane Ida, although some structures had antenna and line damage or mounting frames out of alignment.

The only known cell site that collapsed as a result of the aftermath of a tornado spawned in the northeast, was a 150-foot monopole owned by American Tower that collapsed in New Dublin
Township, Pennsylvania, as reported by Wireless Estimator on Sept. 3., 2021.

Wireless Infrastructure Association President and CEO Jonathan Adelstein’s June presentation on building resilient networks before the Subcommittee on Communications Media, and Broadband Committee was personified in the past eight days as wireless communications saw an increased speed of restoration while many fiber lines were still cut and wireline and cable communications outages for subscribers were at 252,699.

The number of towers that are out of service due to damage are 43, compared to 128 on Aug. 30, 2021 when Ida came ashore near Port Fourchon, Louisiana.

Broadcast towers didn’t fare as well as cell sites. Louisiana’s tallest tower owned by iHeart Media collapsed in Vacherie and a radio station’s tower in Mississippi succumbed to Ida in Mississippi when a tree fell onto one of its guy wires. 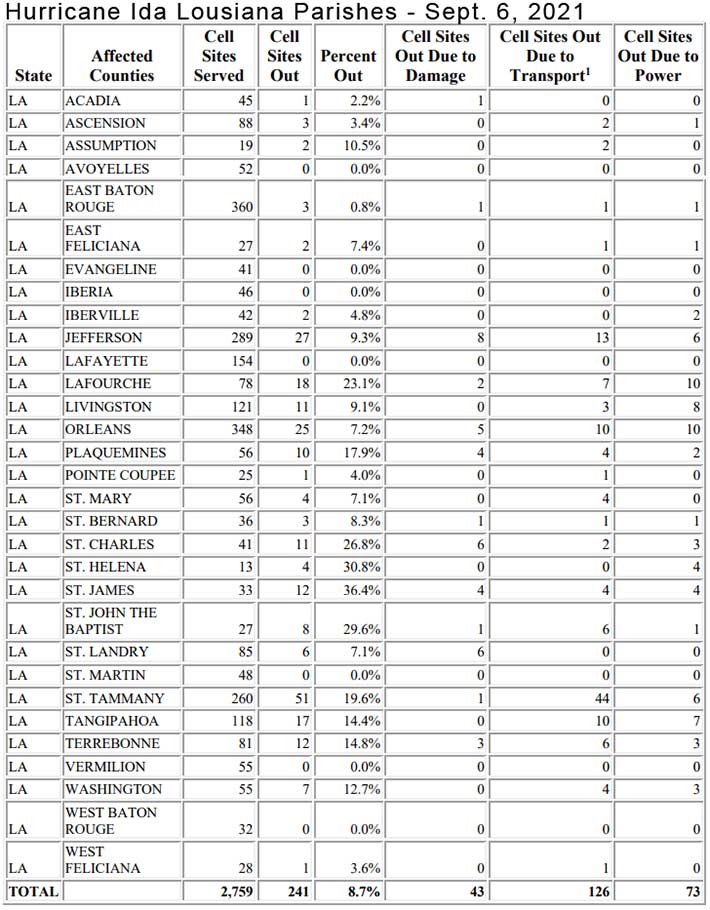