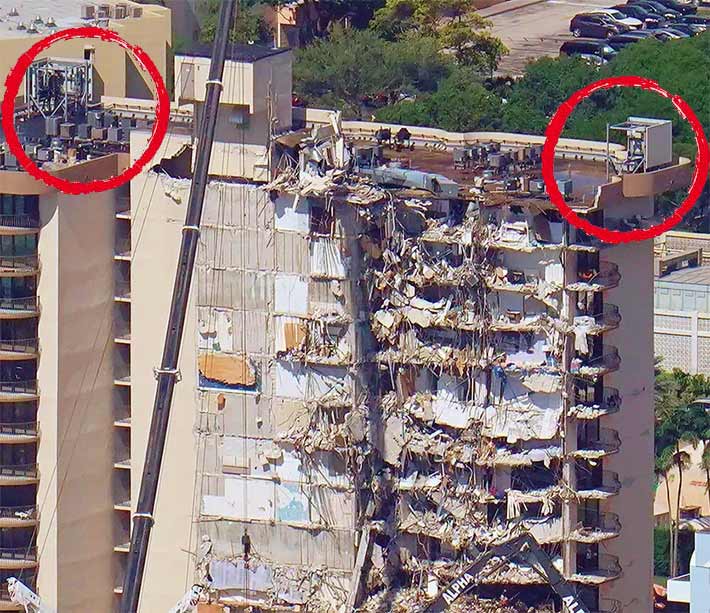 There were two cell site sector antenna locations on the west side of the oceanfront condominium building that survived the collapse. It is unknown who the carrier was.

UPDATE: June 29, 2021 – Two lawsuits have already been filed against the Champlain Towers South Condominium Association. One of the lawsuits alleges that recently added weight to the building’s roof was “the straw that broke the spine” of the complex.

It also claims that the association had “contracted with a cellular antennae provider/contractor, allowing it to install a transmission and/or receiver antenna on the roof in the last 12 months, again adding load and construction activity vibration, penetration and movement to the failing structure without proper investigation as to the potential or likely impacts of such activity.”

June 28, 2021 — Authorities report  that communications between local, state and federal agencies during the ongoing search and rescue efforts at the Champlain Towers South, Surfside, FL condominium building collapse early Thursday morning are not being hindered by the scale of the operation, the greatest multi-agency effort in America since 9/11.

Also, cell phone coverage in the immediate area appears to be adequate to handle the increased traffic and FirstNet is monitoring the situation to assist Miami-Dade County with additional resources if required. 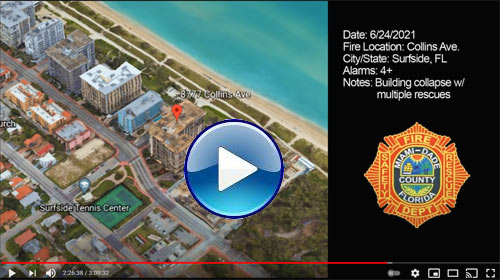 Ten people are confirmed dead. And there are more than 150 people still missing as of this afternoon.

The oceanside condominium building has a cell site with two sectors on the west side that did not collapse but are not operational after power was cut to the building. The carrier is unknown.

A husband who was not in the building said that his wife called him, frantically explaining that the condo building was shaking. She said she saw a sinkhole where the pool used to be. Then the line went dead.

Authorities said today that the number of rescue workers at the site is estimated to be 400, many of them digging feverishly to find survivors.

“We are not resource-poor,” said Mayor Charles W. Burkett of Surfside yesterday morning on ABC News. “We don’t have a resource problem, we’ve had a luck problem. We just need to start to get a little more lucky right now.”

Telephone lines and cells became overloaded, and the Hospital Emergency Administrative Radio system was only operational in three of the 15 area hospitals.

The incident, which saw 163 individuals perish, prompted many studies that resulted in agencies being able to respond more efficiently to the 911 collapse and the Surfside catastrophe.

Initial communications Thursday morning, available here, between dispatchers and first responders, reveal a professional response that assuredly allowed multiple agencies to rush to the site and quickly organize a plan that would allow them to assess the damage and free as many survivors as they could from the pancaked 13-story building.

The lengthy communications between first responders discusses where the emergency personnel are in the building. The FCC recently fined the country’s three primary carriers for not meeting scheduled guidelines for providing vertical locations of callers within a building.

Although there have been cases where individuals have been saved under debris from other building collapses after 100 hours or more, it’s likely in another day or two, rescue management personnel will be considering whether their mission changes from a rescue to a recovery effort.