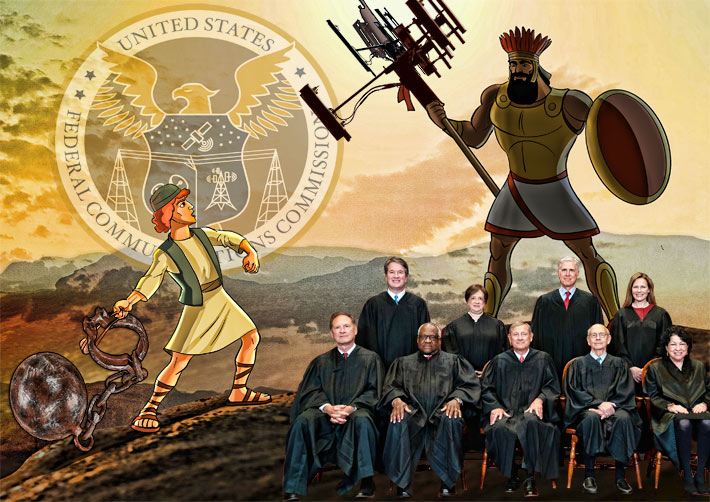 SLINGING A SHOT AT THE FCC – In support of Portland, Oregon’s request for the U.S. Supreme court to reopen challenges to the FCC’s small cells order, municipal associations said in their brief that this is a match between David and Goliath and the FCC has tied David’s hands behind his back and taken away his slingshot.  SCOTUS didn’t address the biblical match, it just denied the Writ of Certiorari today.

Today, the U.S. Supreme Court denied the Petition for Writ of Certiorari filed by local governments, which identifies that the court will not consider an appeal from the 9th Circuit’s decision upholding portions of the FCC’s 2018 Declaratory Ruling related to small wireless facilities deployed in the rights of way.

Although the high court will not provide the reason for it’s denial of the City of Portland, Oregon’s request to reopen challenges to the FCC’s 2018 order, they have clearly weighed the two briefs filed earlier this month stating that the FCC rightfully fulfilled all of its rulemaking obligations when it limited how much discretion localities have to influence 5G permitting decisions.

The lobbying group for communities working in all arenas of local government telecommunications, NATOA, said, “While we continue to believe the FCC got it wrong in their 2018 small cell orders and would have liked the Supreme Court to review them, our collective focus needs to be on ensuring every household and business has access to affordable, reliable and truly high speed broadband services. In the nearly three years since the FCC issued these orders, that need has only grown more urgent and unfortunately these orders have not moved the needle. NATOA and its members will continue to use the tools we have to push for real, community-focused solutions to the digital divide.”

The Wireless Infrastructure Association said it was pleased that the court declined to hear the appeal. CTIA also agreed with SCOTUS’s decision.