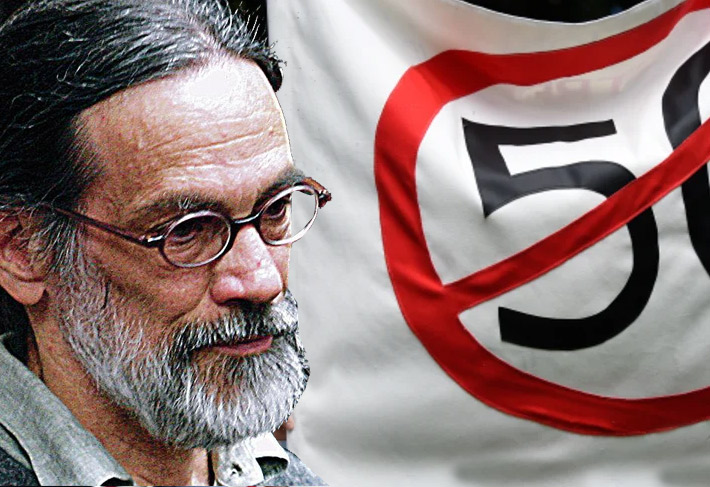 The Tenth Circuit hears only a small number of cases by all active judges each year and they have to be of “exceptional public importance.” They will consider the merits of the Arthur Firstenberg-led petition for a full hearing on a previously dismissed RF lawsuit in New Mexico, but will not have knowledge that he is a serial litigator and a conspiracy theorist promoting that 5G could be responsible for COVID-19.  Also joining the lawsuit is Monika Steinhoff, a local artist who is also a devout conspiracist.

The Tenth Circuit abandoned its judicial duty when it shot down most of the constitutional claims in March in a lawsuit accusing Santa Fe, NM of exposing residents to dangerous radiation levels by installing telecom equipment in public rights-of-way, a local alliance group has told the court.

The Santa Fe Alliance for Public Health and Safety along with Monika Steinhoff, a local artist, and the alliance’s president, Arthur Firstenberg, a COVID-5G conspiracist, want the full circuit court to review the decision, which revived the plaintiffs’ complaint in part but fell short of a full win for the green group, finding their claims lacking, but converting the dismissal with prejudice to one without prejudice for a limited purpose.

The petition for a full rehearing is available here. 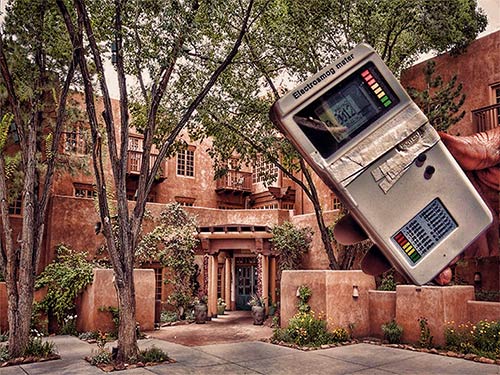 The two plaintiffs behind the Santa Fe lawsuit had previously measured the Hotel Santa Fe’s rooftop cell site with their battered meter because they said it was causing them health issues for almost a month. There was no need to since AT&T said that the newly constructed site wasn’t transmitting and would not be operating for at least one to three months later. Meter inset photo: Santa Fe New Mexican

“The panel’s statement that no one could ‘successfully bring suit for injuries they attribute to radio-frequency emissions’ is factually erroneous and violates civil liberties,” the lawsuit alleges.

They said a single sentence in the Telecommunications Act of 1996 (TCA) that prohibits states and local governments from regulating cell towers on the basis of health has precluded all citizens of the United States, for the past 25 years, from doing anything to protect their health, lives, and property from the radiation emitted by such facilities.

“They are instructed not to speak at public hearings regarding such radiation, and if they do speak, they are penalized for it and their elected representatives must ignore them,” the lawsuit states.

The alliance is arguing that the panel’s ruling that they lack standing to challenge the constitutionality of laws to prevent future injury conflict with case law.

The plaintiffs said their rights to life, liberty, property, speech and due process under the First, Fifth and Fourteenth Amendments – their rights to survival – have been taken from them by these laws.

They believe the judges on the panel did not base their decision on facts and law but instead on “their own disbelief, belied by the detailed allegations and voluminous evidence already presented in this case, that radio frequency radiation could possibly have the effects that those allegations and evidence prove.”

The plaintiffs point out that there were no cell towers in Santa Fe before the TCA and, injured citizens could sue for damages before the TCA.

However, a New Mexico wireless contractor informed Wireless Estimator that there were analog cell towers in Santa Fe prior to 1996, and numerous other sites throughout the state.

Steinhoff has been concerned about RF radiation health issues for many years, according to the Santa Fe New Mexican, She said her stomach was in an “agitated state” beginning June 1, 2013, after a new cell site was concealed on a hotel roof near her art gallery located a block away on Guadalupe Street.

She used her battered Electrosmog meter to measure radiation near the Hotel Santa Fe, but it was likely that she couldn’t identify questionable RF levels for the reporter since AT&T later said the site had not been connected and wouldn’t be operational before July 1 and possibly as late as Sept. 30.

Firstenberg, who lives about a third-of-a mile away from the hotel, said that on June 1, he thought he was having a heart attack. And he was also troubled with heart symptoms for many weeks, especially in the middle of the night, possibly because he had learned, “…that the middle of the night is when they download updates into everybody’s phones.” 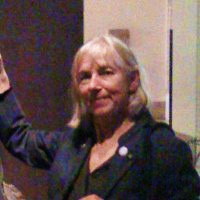 According to court records, after the AT&T site was operational, Steinhoff then shielded the roof of her gallery as well as its large windows, but she said she still felt unwell and was forced to find another location for her gallery on Canyon Road. Then she opened her A SEA (Association of Socially Engaged Artists) in the Desert Gallery on Santa Fe Trail, but closed it late last year due to COVID-19.

Nanobots and aluminum are allegedly in the vaccine: Steinhoff

Steinhoff still maintains a blog where she states that COVID-19 “is so serious because world-wide public health is so impacted by the negative effects of wireless”.

Yesterday, she wrote that vaccinated people are shedding toxins to others and if you “put a magnet on to the point where the needle went into the arm: the magnet sticks! There is aluminum in the mix.  And I have further proof of it. And Nanobots. Those in power want this all dismissed as a ‘conspiracy’ theory. Well, it’s not just a theory; it is a conspiracy. The truth will emerge.”

An accepted truth is that aluminum, under normal circumstances, is not magnetic. 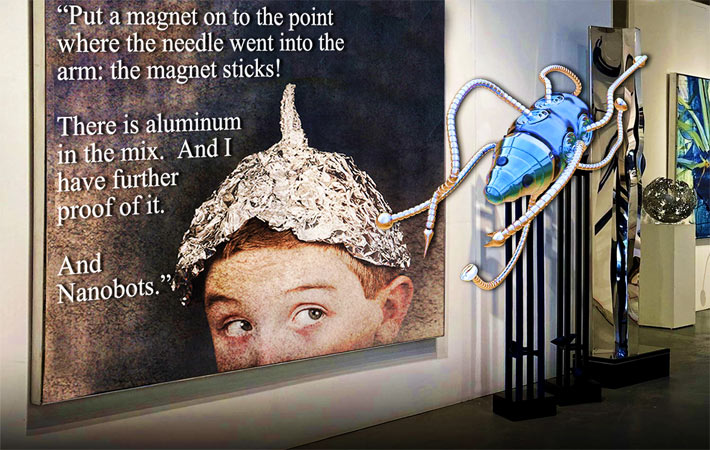 Local artist and co-plaintiff Monika Steinhoff’s newest conspiracy theory published yesterday, which she states will certainly emerge, is that there are nanobots in the vaccine as well as aluminum. “Perhaps not enough to fashion a tin foil hat,” said RF consultant Lawrence Behr.

Lawrence Behr, CEO of LBA Group, a leading RF consulting company established in 1963, mocked the type of meter that was used by Steinhoff and Firstenberg to convince themselves that their purported ills were caused by the AT&T site. 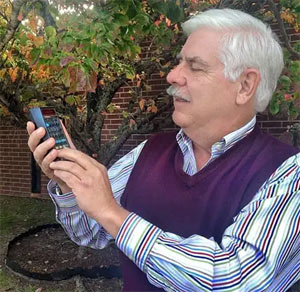 “Often these wackos use these Electrosmog-type meters that have red flashing lights and alarms, frequently triggering at levels thousands of times below recognized government maximum permitted exposure standards. But they make great props for TV and video media in front of people driven by pseudo-science on social media,” Behr said.

“For the gullible, social media also offers a limitless support group. It’s a wonder real science-based RF safety even breaks through the noise,” Behr informed Wireless Estimator in an interview

Along with RF consulting, Behr’s company also provides RF shielding solutions for government facilities, data centers and other companies requiring security. As a consequence, they come to the attention of RF conspiracy types seeking to shield or otherwise free themselves from their perceived RF maladies.

“I recall one individual who accused a large company of toxic WLAN RF in her work area. A blind test was set up and she recorded her symptoms. When the system was radiating RF, she had no symptoms, but when switched off she claimed the most agonizing effects. It mirrors the Santa Fe situation where the cell site had never been turned on,” said Behr who formerly served as a Director of the International Association for Radio, Telecommunications and Electromagnetics.

Sues his neighbor for $1.43 million because she wouldn’t turn off her cell phone

In 2010, Firstenberg, who identifies as a scientist and journalist, filed a lawsuit against his neighbor, Raphaela Monribot, for “refusing to turn off her cell phone and other electronic devices” that were keeping him up at night and destroying his health.

Firstenberg said that he is highly sensitive to almost any amount of EMR, and it was the reason his medical career was derailed after he was exposed to diagnostic dental x-rays.

His expert witnesses consisted of a holistic doctor and a consulting psychologist on neurotoxicity. They were ruled unqualified and his evidence scientifically unreliable and Monribot won a summary judgment against him.

He wanted $1.43 million for compensation but lost the case. Five years later the New Mexico Court of Appeals upheld the lower court’s ruling.

Monribot reportedly had over $200,000 in legal fees that were written off by her pro bono attorneys.

Court costs approaching $85,000 were not paid by Firstenberg because of what the court described as his “inability to pay”.

In May 2008, Firstenberg and other groups accused Santa Fe of discrimination against those allergic to EM radiation for having free wireless networks in city buildings. The case was dismissed in 2011.

It is not known how Firstenberg is able to fund the filing and appeals of his lawsuits and his legal representation.

Firstenberg is also concerned about the number of satellites that SpaceX is considering, stating: “You cannot contaminate the global electrical circuit with millions of pulsed, modulated radio signals without destroying all life.”