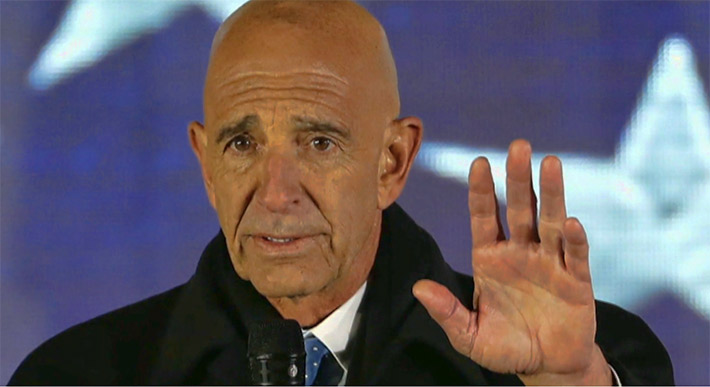 Thomas Barrack, former Chairman of Colony Capital and board member of DigitalBridge Group was arrested yesterday in Los Angeles. His bail hearing is set for Monday.

Update: July 23, 2021 – Federal prosecutors agreed upon a $250 million dollar bail today for Thomas Barrack while he awaits trial on charges that he illegally lobbied  the U.S. government on behalf of leaders in the United Arab Emirates.

The second highest was for Kim Freeman who was charged in Ohio with operating a brother in 2010. The $1 billion bail cost $25 million,

The highest bail ever in the U.S. was for Robert Durst, the real estate heir that was charged with the murder of his wife.  He posted a $1 billion bail, but he skipped on it and was then rearrested and given new criminal charges of tampering with evidence. As a result, the judge set bail at $3 billion, according to a bail bond monitoring group.

After being charged by the Department of Justice  for acting as an unregistered foreign agent for the United Arab Emirates, DigitalBridge Group board member Thomas Barrack has relinquished that position, according to an SEC filing this morning that said,  “Thomas J. Barrack, Jr. resigned as a member of the board of directors of DigitalBridge Group, Inc. Mr. Barrack’s decision was not the result of any disagreement with the Company on any matter relating to its operations, polices or practices.”

Barrack, a private equity investor and longtime friend of former president Donald Trump and chair of his 2017 inaugural committee was arrested yesterday and is currently in jail in Los Angeles, awaiting a bail hearing next Monday.

He was charged with two other men in a seven-count indictment in federal court in Brooklyn, New York.

According to a detention memo, the evidence of Barrack’s guilt in the case is “overwhelming”.

The indictment is available here.

DigitalBridge was likely aware that Barrack was under investigation by the US government since the investigation has been going on for almost two years and Barrack’s spokesperson, according to CNBC, said that he has “made himself [Barrack] voluntarily available to investigators from the outset. He is not guilty and will be pleading not guilty.”

Barrack had been stepping away from the company after Marc Ganzi joined Colony Capital in July 2019. President and CEO Ganzi has been scaling back the company’s real estate investments in order to focus exclusively on digital infrastructure such as cell towers, small cells and data centers.

Colony Capital rebranded into DigitalBridge on June 22 with its stock reaching a high of $8.10. Today, it closed at $6.87.

“In our view, his voluntary [Barrack] resignation was the best outcome for the company, both as it relates to removing any lingering headline risk and accelerating the timeline for his departure,” the financial analysts at B. Riley Securities wrote in a note to investors, according to LightReading.

“In our estimation, there had been widespread shareholder dissatisfaction with his continued presence on the board, even in a limited role. As such, his voluntary resignation should be viewed as a net positive for the company.”