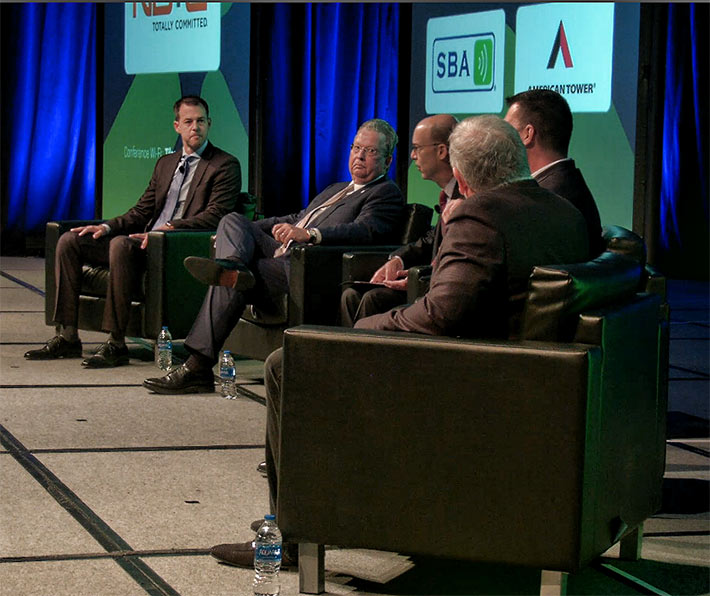 Connect (X)’s The View From the Top, a panel discussion with the nation’s four largest tower companies’ executives, narrated by Wireless Infrastructure Association (WIA) President and CEO Jonathan Adelstein, had one overriding message this morning, 5G is just starting and the platform’s deployment cycle is likely to provide another decade of robust industry growth in all sectors.

“To me, 5G and what is happening now is just a continuation of what’s been happening for decades which is everything will go wireless if it can.”

He did say that he knows that “when the two biggest carriers spend that much money on spectrum, then they have to deploy it. And the way they deploy it is where they already have it.”

He said the nation has had a long period for LTE and 5G could be “a very long cycle as it is deployed.”

Jay Brown, President and CEO of Crown Castle agreed, stating that it’s very early in the 5G deployment cycle, “and I think the carriers will focus initially on sites they are already on and we’ll see amendments on our sites. At some point, we’ll get the densification and we’ll see far more additional work on new sites.”

“I think we’re better off thinking about it as a platform for future integration. And I think what we saw happen to our industry when the iPhone got launched, it wasn’t so much the iPhone, but the platform it created for all the apps.”

Steve Vondran, Executive VP and President, U.S. Tower Division, American Tower Corp., said 4G took a decade and “I do think that we’re at the very early stages for another decade.

Then there was the Dave Mayo lovefest

Panelists gushed over the Dish Network opportunities they were being accorded and Executive Vice President, Network Development, Dave Mayo’s management of it.

“We are running as fast as Mr. Mayo tells us to run, which is awfully fast,” said Jeffrey Stoops, CEO and President, SBA Communications Corp., noting that “they have come out of the gate very quickly”.

“They are for real and the network build is happening, and I think it’s going to continue a pace for some period of time.”

He said Mayo has put together a great team, “And I think our industry, all of us to some degree, are the beneficiaries.

“We’re going as fast as we possibly can for Dave,” said Brown, and in reality, we’ll be doing that for years.”

Infrastructure bill benefits explored as well as a labor shortage

The panelists noted that WIA membership and Adelstein should take well-deserved bows for ensuring that funding will be available for wireless in the $64 billion infrastructure bill that is still in limbo.

“We’ll have to see how that federal funding goes There are some very different trails that that money could go down, and where that goes, and how it gets spent, and who makes those decisions and the timing of that,” Stoops said, cautioning that WIA needs to monitor the bill’s progress.

He noted that the additional broadband work “could certainly disrupt the system in terms of labor.”

“We are very fully employed right now as an industry. I don’t know that there is any material shortages and labor today, but it could happen and we need to stay vigilant about training and attracting people to the industry, taking care of our people,” said Stoops

In the past five to ten years, Brown said, “We’ve gone from an inability to recruit people outside of the industry to the ability to recruit anybody in the world to come to work for these businesses and the track record of success of these companies has been a part of that.”

He said that wireless was a great place to build a career.