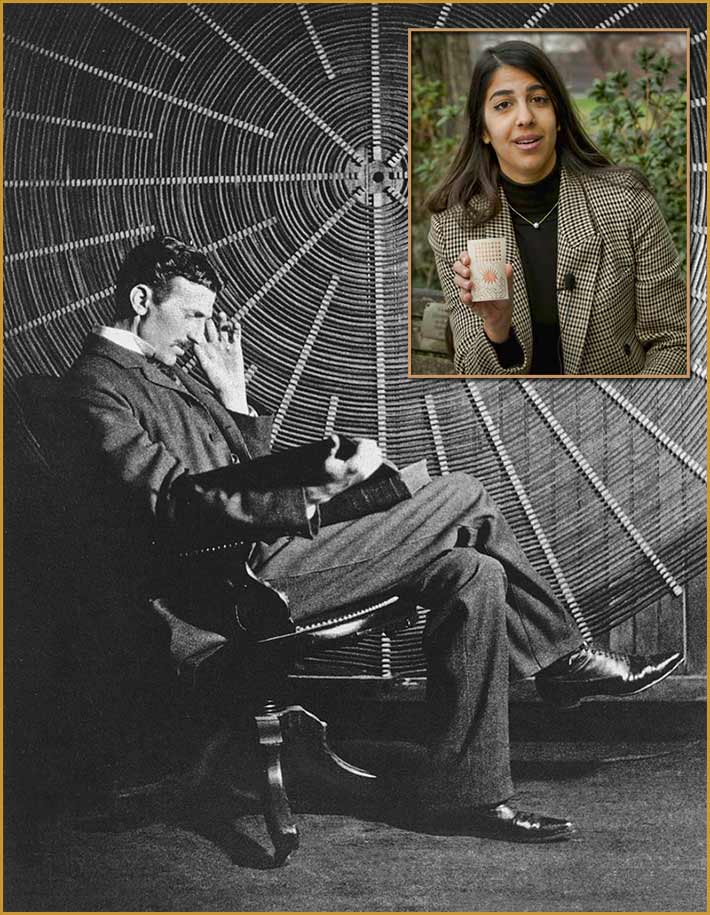 Aline Eid (inset) holds an inkjet-printed prototype of a mm-wave harvester. She and two other researchers from the Georgia Institute of Technology’s ATHENA lab believe that IoT devices can be powered by using excess 5G capacity. Nikola Tesla, sitting in front of a spiral coil used in his wireless power experiments, was not successful in transmitting energy from tower to tower and ran out of money in 1905.

A research team from Georgia Institute of Technology has announced that they have developed a 3D-printed rectifying antenna the size of a playing card that can harvest electromagnetic energy from 5G signals and use it to power devices, saving billions of batteries in the process.

The Georgia Tech team’s study published in the peer-reviewed journal Scientific Reports, notes that 5G has been designed for blazing fast and low-latency communications.

“To do so, mm-wave frequencies were adopted and allowed unprecedently high radiated power densities by the FCC. Unknowingly, the architects of 5G have, thereby, created a wireless power grid capable of powering devices at ranges far exceeding the capabilities of any existing technologies,” the report notes.

The team used a component called a Rotman lens – a lens that is handy in a range of mm-wave applications as a beam-forming tool, effectively turning a single, large, high-gain, narrow-angle antenna beam into a series of simultaneous antenna beams covering a much wider angle.

They allow radar systems, for example, to see targets in multiple directions without having to rotate or move the radar itself.

In 1901, Nikola Tesla became consumed with his theory that electricity could be transmitted wirelessly through the air at long distances—either via a series of strategically positioned towers, or hopping across a system of suspended balloons.

He ran out of money and abandoned the idea, and a century later his wireless power grid might be realized.

For an excellent article that puts the team’s findings into focus, Tech Xplore looks at the teething problems that a wireless electric grid will encounter.