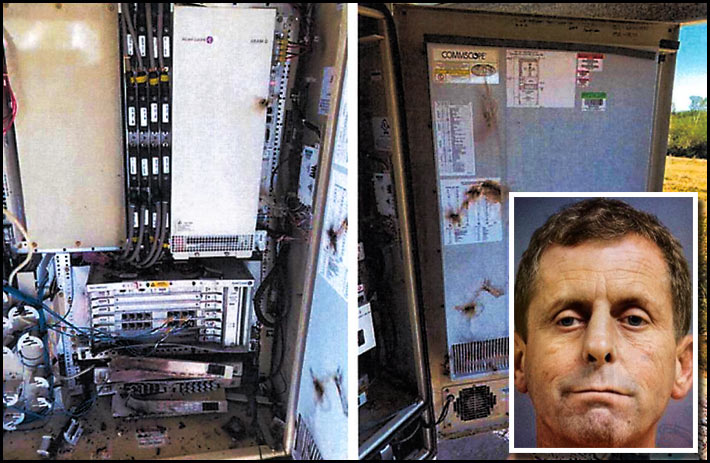 Victor Schexnayder, inset, was denied bail after he was arrested for allegedly using a powerful firework to blow up an AT&T digital transmission site in Mississippi. He had been previously fired after 20 years at AT&T as a digital technician, he said, “because of a stupid code of conduct” and “I speak freely.” Some media reports incorrectly identified that the incident took place at an AT&T tower site. Photos: ATF, inset, Jefferson Davis County Sheriff’s Office

A bail bond was denied last Wednesday for a man accused of planting an explosive device at an AT&T digital transmission site in Jefferson Davis County, MS earlier this month.

According to a criminal complaint filed by special agent Michael Knoll with the Bureau of Alcohol, Tobacco, Firearms and Explosives, Victor Joseph Schexnayder, 48, is accused of “maliciously damaging or destroying, or attempting to damage or destroy, by means of fire or an explosive, any building, vehicle, or other real or personal property used in interstate or foreign commerce.” 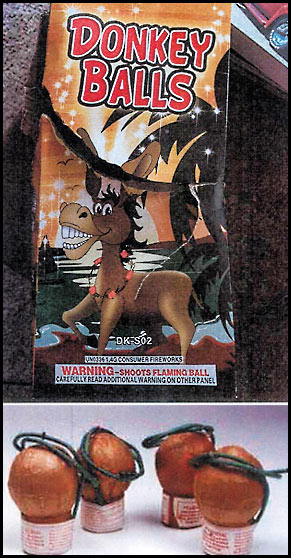 The Donkey Balls fireworks appear to be harmless explosives, but just one of them took out of operations an AT&T digital transmission site. (ATF photos)

The investigation started around 9:30 a.m. on September 8, 2021 when AT&T technicians were sent to investigate a shut-down of a phone and internet digital transmission site at 1064 Clem Road in Prentiss that occurred approximately seven hours earlier.

AT&T records showed the door to a steel cabinet housing electronic equipment had been opened at 2:03 a.m. and closed six minutes later. System alarms then identified the entire site being shut down at 2:27 a.m.

When the technicians got to the scene, they found all the doors to an equipment housing cabinet open with extensive damage to the equipment inside.

The following day, according to the complaint obtained by Wireless Estimator, digital technician Sam Staples brought the damaged equipment to the Jefferson Davis County Sheriff’s Office, whose investigators determined the damage was likely caused by an explosion.

ATF agents Knoll and Kevin Roch were contacted to investigate, and they confirmed the damage was caused by an explosion, and samples of explosive residue were collected for forensic laboratory examination.

Knoll interviewed Staples and his supervisor, Mark Lang, who said Schexnayder had recently been fired as a digital technician because of “poor performance.” He also told agents Schexnayder failed to return his AT&T-issued keys after his termination.

According to the complaint, Lang told agents he gave Schexnayder a ride home on the day he was fired and accidentally dropped his own keys in Schexnayder’s yard. When he returned to retrieve them, he heard a loud explosion come from the rear of Schexnayder’s home.

Schexnayder then approached Lang, telling him he knew he was there and was trying to scare him.

Lang also reported Schexnayder had threatened him in text messages in the days after he was fired.

The complaint states that Schexnayder told the investigators in a recorded interview that he felt he was fired in June from AT&T after 20 years because of a “stupid code of conduct” and “because I speak freely.”

He also stated to agents prior to his firing while at work, he told others, “If I get one more thing on my plate, I’m going to go postal.”

Although he said his boss “had it out for him,” he admitted that he was “screwing up” though.

In the complaint, Knoll said he asked Schexnayder how much damage had been caused at the AT&T transmission site and then told him the site had been destroyed. Schexnayder reportedly replied “the whole site can’t be destroyed” and then tried to backtrack on that statement.

After further questioning, Schexnayder admitted that he went to sleep on the night of September 7 but woke up at some point in the night and drove to the AT&T site, according to court records.

Schexnayder admitted to opening the door of a cabinet housing electrical equipment with a pocket knife, placing an aerial burst firework on a shelf inside the cabinet, lighting the fuse and closing the door. He then left the scene and returned home.

The complaint states that Schexnayder showed the investigators a utility trailer on his property that contained several kinds of fireworks. Schexnayder then showed investigators the box that previously contained the firework he said he used to damage the AT&T site.

The box had the product brand name “Donkey Balls.”