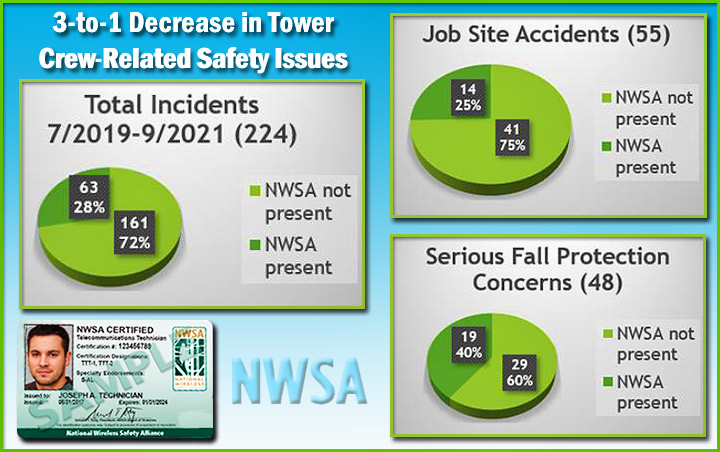 The National Wireless Safety Alliance (NWSA) announced today that due to the collaboration of all sectors of the telecommunications industry, there has been a dramatic three-to-one decrease in tower crew-related safety issues and accidents when NWSA trade certified technicians are present on jobsites.

This major safety improvement is the result of countless hours donated by volunteers representing the broadest-ever consortium of telecommunications industry subject matter experts and executives from over 100 companies.

According to NWSA, those efforts are guided through a disciplined process by NWSA’s 31-seat Board of Governors, comprised of a balanced cross-section of industry sectors, who provide oversight and governance for the organization and its programs.

With the large number of national and regional wireless carriers, publicly traded and privately held tower owners, and OEMs that recognize the importance of accredited trade certification and require NWSA certification as a contractual requirement, data now shows NWSA’s value to the industry.

How the safety data was derived

NWSA said that according to reports from a major tier-one company that collected data for over two years, the effect of NWSA certification during thousands of on-site safety audits indicates that accidents are three times less likely to occur when NWSA-credentialed workers are present.

“Even better, in 243 audits where TTT-2 credentialed technicians were present there were zero incidents. Put simply, NWSA credentials dramatically reduce crew-related safety incidents. Such improvements have been a major goal of NWSA and the industry from the beginning,” the Alliance said in a statement.

Why NWSA certifications were established

During 2013, according to statistics compiled by Wireless Estimator, the industry suffered a significant spike in fatalities with the loss of 14 lives; followed by an additional 10 fatalities in 2014. Because of this disturbing trend, top operations and safety executives representing wireless carriers, the broadcast industry, tower owners, OEMs, turnkey/construction management firms and contractors met with officials from NATE: The Communications Contractors Association and Black & Veatch at the Telecommunications Industry Safety Summit in Dallas, Texas. 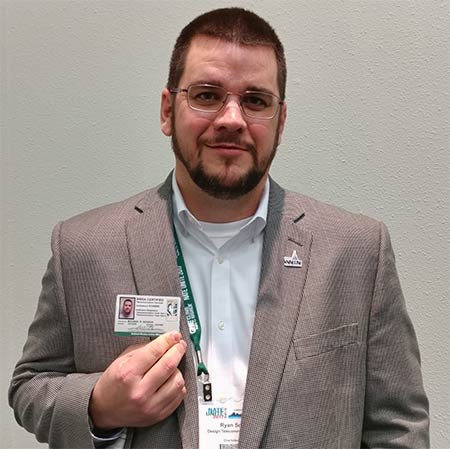 They discussed the demanding state of the industry, major areas of concern and leading indicators that compromise safety and quality. They also collaborated on best practice solutions.

These stakeholders agreed that there was an immediate need to work together in order to make an impact for positive change, and achieve sustainable safety and quality improvements.

In 2015, this groundwork led to the establishment of NWSA as a non-profit independent certification body. From the beginning, NWSA was designed to provide the telecommunications industry with unbiased, nationally standardized assessments and trade certifications.

As had occurred within other skilled trades, NWSA took the next logical step and created a meaningful way to validate and verify the telecommunications workforce knowledge and skills to meet safety, quality and proficiency expectations of the entire industry. It did so by following the ISO/IEC 17024 standard and accrediting its programs through the American National Standards Institute (ANSI) National Accreditation Board (ANAB).

With the help of over 100 companies from every sector devoting more than 16,000 hours of combined expertise and executive leadership, as well as significant financial contributions totaling nearly $1.4M to date, NWSA has been able to develop and maintain the industry’s first accredited trade certification programs. 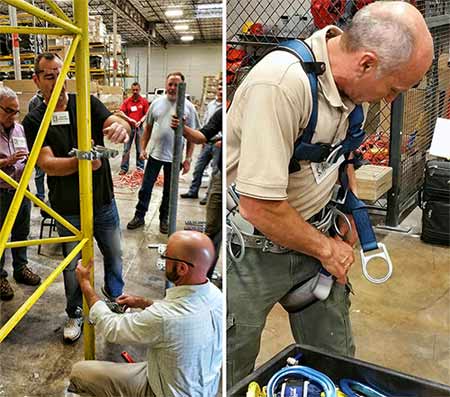 With the help of over 100 companies’ subject matter experts spending over 16,000 hours of their expertise and leadership, NWSA has been able to develop and maintain the industry’s first accredited trade certification programs. Their common belief was it would create a safer and more quality-conscious workforce. Today’s incident data validates how certification will provide a safer environment for tower crews.

The Telecommunications Tower Technician 1 (TTT-1) and Telecommunications Tower Technician 2 (TTT-2) trade certification programs were launched in late 2016 and became fully accredited by ANAB in June 2020. NWSA has since launched Spanish language versions of the TTT-1 and TTT-2 exams, as well as Antenna & Line Specialty and Foreman certification programs.

“Saying thank you does not do justice to the thousands of subject matter expert hours donated by numerous industry firms along with all the donations received towards the development and maintenance of NWSA exams,” NWSA said in a statement.

They state NWSA trade exams have now proven to make a positive difference, improving safe work practices and reducing the number of incidents, injuries, and fatalities across the busy telecommunications industry.

Industry workers, companies and stakeholders are encouraged to visit the NWSA website at www.nws-a.org to learn more about how NWSA certification can continue to dramatically reduce safety incidents and validate and verify workforce knowledge and skills.