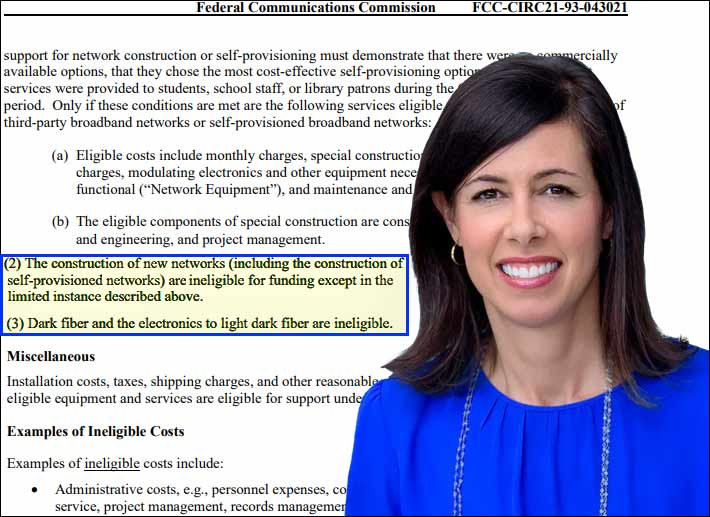 Acting FCC Chairwoman Jessica Rosenworcel said, “Even as the pandemic ebbs in some areas and surges in others, millions of students are still engaged in remote learning, and there is no time to lose.”

Acting FCC Chairwoman Jessica Rosenworcel on Friday laid out the proposed rules for the Emergency Connectivity fund that excludes new network construction from a $7.17 billion program meant to help students get and stay online as the coronavirus pandemic drags on, planning to limit purchases to laptops, tablets and Wi-Fi hot spots.

The FCC noted that they did not receive a single comment or other filing from a school or library claiming that they purchased smartphones to use instead of laptops or tablets for their students, school staff or library patrons or have found smartphones to be good substitutes for tablets or laptop computers.

“In so doing, we agree with commenters that argue that, as a general rule, using Emergency Connectivity Fund Program support to construct new networks or self-provisioned networks is inconsistent with Congress’ intent to fund “the purchase” of broadband services to meet students, school staff and library patrons’ immediate needs, rather than the construction of networks,” the FCC stated.

They disagreed with those commenters that argued that Congress intended that the Emergency Connectivity Fund be used to support everything eligible under the E-Rate Program’s category one services because it referenced “advanced telecommunications and information services” under section 254(h) of the Communications Act.

“During the pandemic, our classrooms went virtual and what was already an unconscionable homework gap has become a learning chasm with even more devastating consequences,” Rosenworcel said in a statement.