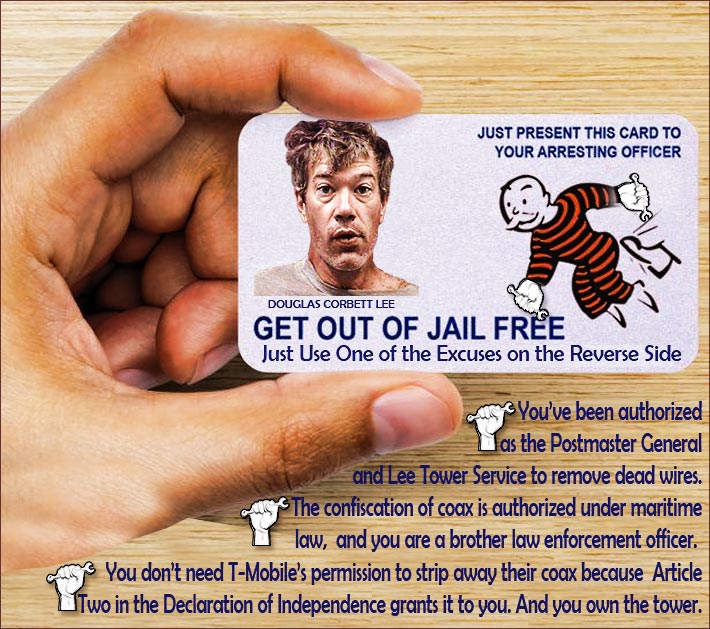 Tower Tech Douglas Lee read off chapter and verse of United States Law to a deputy investigating T-Mobile transmission line thefts at an SBA site in North Carolina. The deputy saw through his ‘smoke’screen and then read Lee his Miranda rights.

A well-known social media tower tech faces a half-dozen charges in Rowan County, NC after he allegedly removed transmission lines last Thursday from a 230-foot self-supporting tower to sell them for scrap, causing an outage for T-Mobile customers, according to the Rowan County Sheriff’s Office.

A resident had alerted authorities that a suspicious person was at the site and a deputy responded to the cell site off of G Goodnight Road that was surrounded by trees.

Although sections of transmission lines were found in Lee’s truck, he presented reasons, although questionable, why he was at the site.

He reportedly said that he was working for the owner of the tower and then later said he owned the tower, but if the deputy looked at the signs on the gate it is likely that he would have noticed that the structure is owned by SBA Communications of Boca Raton, FL.

He also said that his company was Lee Tower, Inc. and since he was a tower tech by trade, oftentimes taking on 1099 work, he most likely impressed the deputy  with his breadth of knowledge and industry vernacular.

But the ruse fell apart when a technician from T-Mobile arrived at the site to investigate a NOC outage report and he informed the deputy that Lee wasn’t authorized to work on their equipment on the multi-tenant tower.

If the deputy had any reservations about whether or not Lee was authorized to be on the site, they quickly evaporated after Lee started blathering about the tower falling under the control  of maritime law and that he was also empowered to do the work under Article Two of the Declaration of Independence and the country’s founding fathers had authorized him to be postmaster general.

On Lee’s Facebook page, he states that in 1998 he started a new job as Postmaster of the U.S. House of Representatives.

Prior to being arrested, Lee went to his pickup truck and showed the deputy a binder that contained information about laws and the United States constitution.

In past years, he was a frequent poster in industry Facebook groups, oftentimes delving into lanes of bombastic political commentary that no one could understand or agree with.