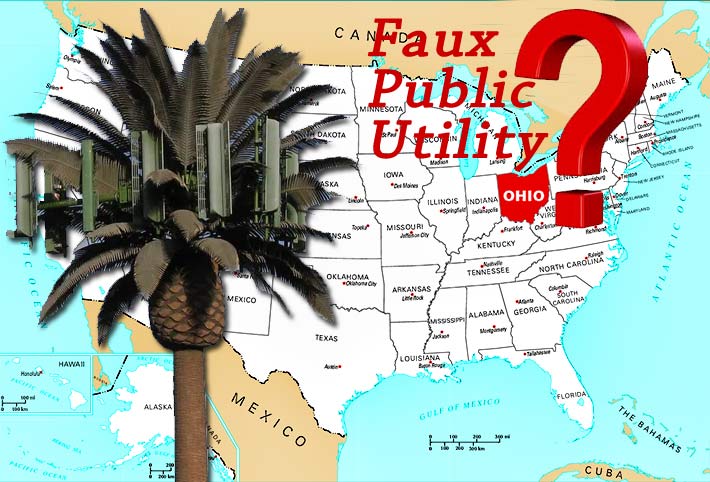 “Google uses its dominance of internet search to steer Ohioans to Google’s own products–that’s discriminatory and anti-competitive,” Yost said.

“When you own the railroad or the electric company or the cellphone tower, you have to treat everyone the same and give everybody access,” Yost said in a statement, causing two vertical realtors to question his comment, disagreeing that they had to provide tenancy to any company requesting to co-locate on their towers.

“It’s nonsense, we own the towers, but we’re not a public utility company and we don’t have to allow a tenant on a tower, especially if the capacity isn’t there and the company will not pay to upgrade it,” said one tower company CEO whose company has over three hundred structures throughout the U.S., some in Ohio.

“I’m not quite sure how we could be considered to be a public utility. We’re far removed from being considered a common carrier,” said another tower owner executive regarding their macro sites. “We’d all like to have the equivalent dominance of Google, but there are too many competitive companies in America to achieve that possibility.”

An attorney specializing in lease negotiations and site brokerage informed Wireless Estimator that he was not aware of any Ohio regulations that identified that a tower owner is considered a public utility and had an obligation to provide access to any company that requested to be on the structure.

A response regarding Yost’s statement could not be obtained by press time.

The lawsuit does not seek money damages.

In plain terms, Yost argues Ohioans are harmed by Google because they cannot make the best choices if they don’t get all of the information. For example, if someone searches for a flight and Google returns its own presentation of search results to steer the person to Google Flights, the person doesn’t see offers from competitors such as Orbitz and Travelocity.

This is the second anti-competition lawsuit Yost has filed against Google. In December he joined 37 other attorneys general in a federal lawsuit against Google for conduct that violates Section 2 of the Sherman Act.

The Sherman Act is a federal law meant to curtail groups of businesses that collude to form a monopoly in an effort to reduce economic competition.

That lawsuit alleges that more competition in the general search engine market would benefit consumers, for example, through improved privacy protections and more targeted results and opportunities for consumers.