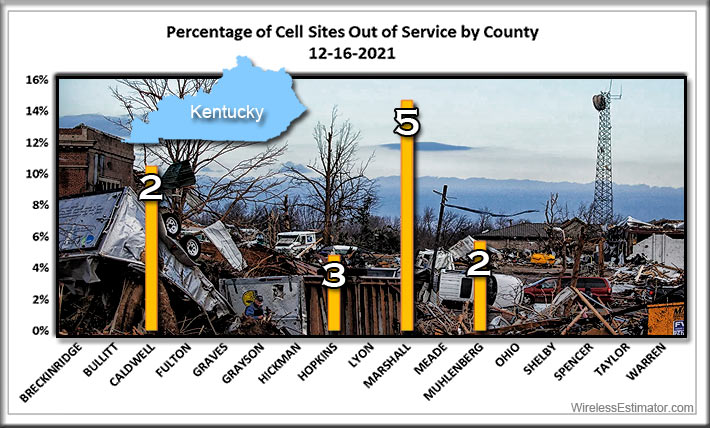 According to the FCC’s Disaster Information Reporting System’s (DIRS) report yesterday, only one cell site was out due to damage from the deadly tornadoes that devastated numerous Kentucky communities last weekend, destroying over 1,000 properties, including facilities of two industry manufacturers.

Although there were an additional 9 cell sites out, 8 of them due to transport issues and 1 out due to a lack of power, the report doesn’t signify that Kentucky’s sites are hardened, it just indicates that the tornados skirted their location.

Social media posts said the tornados had wind speeds of 300 mph and were classified as EF6 tornados which some media outlets took as gospel. The 300 mph claim can’t be documented and the EF6 classification is also incorrect since the most violent Fujita scale classification is an EF5 which is a 3 second gust of over 200 mph.

As of today, the National Weather Service said the most destructive tornado was an EF3 with a wind speed of up to 165 mph.

The DIRS status reports were requested by the Kentucky Statewide Interoperability Coordinator, the Public Safety and Homeland Security Bureau (PSHSB) of the Federal Communications Commission (FCC), in coordination with Department of Homeland Security Cybersecurity and Infrastructure Security Agency and the Federal Emergency Management Agency