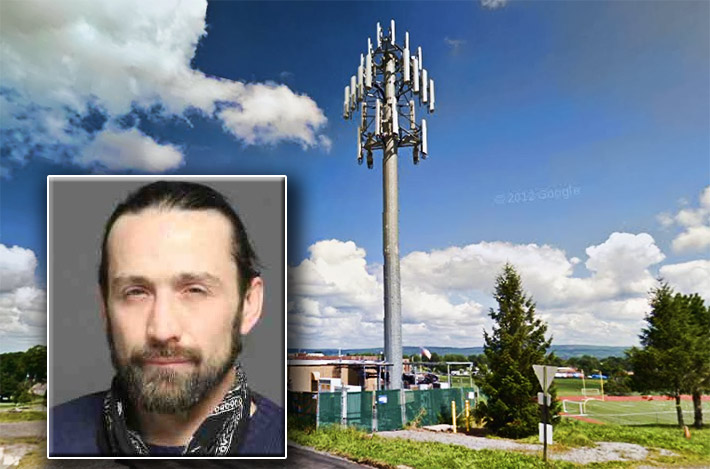 Nathaniel Sergio was charged with allegedly vandalizing multiple towers in New York last December. Authorities will be looking into whether he was involved with Sunday’s power failure of an SBA Communications tower in Utica.

WKTV of Utica, New York broke the story Sunday morning that was picked up by area and industry media that police were investigating damage to a cell phone tower on Mohawk Valley Community College property, causing an event that was taking place on campus to be moved to another location.

One report stated that the tower was set on fire.

However, Utica Police Department Sgt. Michael Curley informed Wireless Estimator that following his department’s investigation it appeared that there had been no damage to the monopole.

Curley said the main power switches were flipped and an empty gas can was left nearby.

“There is no indication that any gas was poured on the tower or any fires were attempted to be started on or near the facility,” Curley said.

Oftentimes circuit breakers are tripped on cell sites and a NOC request will be received by maintenance personnel and authorities are not contacted.

However, authorities may have erred on the side of caution in responding to the site since this SBA Communications 80-foot monopole off of Tilden Avenue had been vandalized last November by a Utica man that was arrested for allegedly damaging several other emergency communication and cell towers.

In December, Nathaniel Sergio, 38, was arrested at his home for scaling a fence and shutting off power in order to shut off power to disrupt service to a cell tower in New Hartford.

While being interviewed by deputies, Sergio admitted to damaging and attempting to disrupt service at numerous towers within Oneida County and Herkimer County, officials said.

Sergio faces two felony counts of criminal mischief in the second degree, along with misdemeanor charges of criminal tampering and criminal trespass.

New York’s Bail Reform laws required Sergio to be released on his own recognizance.

Could Sergio have been responsible for tripping the breakers on the SBA site?

“We will be certainly looking into that party, however due to previous pending cases for the damage previously committed, an interview with him without an attorney will be unlikely,” Curley said.