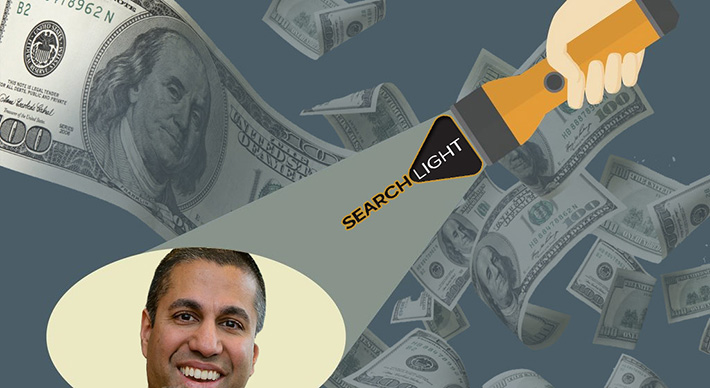 Searchlight Capital Partners, L.P. (Searchlight), a leading global private investment firm, announced the appointment of Ajit Pai, former Chairman of the Federal Communications Commission as its 13th partner and a prospective board member of a number of Searchlight’s existing investments in the technology, media, and telecommunications (TMT) sectors.

The company also has a $79 million interest in tower owner and fiber developer Uniti Group, Inc.

Searchlight ended its investment in General Communication, Inc. (GCI), a voice video and data communication services company in Alaska. While Pai was serving as a Commissioner, the FCC fined GCI $620,000 for not registering 118 towers and lamping three structures in 2015. A year later, GCI felt the FCC’s wrath again when it had to shell out $2.4 million to the U.S. Treasury when the FCC cited it for violations of 911 outages.

While Pai was serving as a lawyer in the FCC’s Office of General Counsel in 2007, Univision  agreed to a record $24 million fine for failing to meet rules for educational children’s programming.

The penalty was part of a consent decree that would allow Univision to complete its $12.3 billion sale to private investors.

Last November, Searchlight closed the Searchlight Capital III, L.P. fund with total committed capital of $3.4 billion, the third private equity fund the firm has raised since it was founded in 2010.

Searchlight’s announcement said that Pai brings deep expertise in TMT, having spent nine years in leadership roles at the FCC.

He first joined the FCC as a Commissioner in 2012, after being nominated by President Barack Obama and confirmed unanimously by the U.S. Senate. In 2017, he was designated Chairman by President Donald Trump and was again confirmed by the Senate.

During his tenure as Chairman of the FCC, Pai advanced major initiatives to help close the digital divide, advance U.S. leadership in 5G and other wireless technologies, promote innovation, protect consumers, public safety, and national security, and make the agency more open, transparent, and diverse.

Earlier in his career, Pai served in various positions at the U.S. Department of Justice and the U.S. Senate. Before joining the FCC, he worked as a Partner at the law firm of Jenner & Block and as in-house counsel at Verizon Communications.

“TMT has always been a core focus at Searchlight and in recent years we have seen the opportunities in these sectors grow, a trend accelerated by the COVID-19 pandemic,” said Eric Zinterhofer, a Founding Partner of Searchlight.

“Given our strong presence in this space and Ajit’s distinguished career in the industry, we are excited to welcome him as our newest partner. His outstanding accomplishments at the FCC had a material impact on the broadband, wireless, and broadcast sectors, and his deep knowledge will be invaluable in accelerating our efforts in TMT and digital infrastructure.”

Acknowledging the opportunities provided by his partnership, Pai said, “I am excited to join the Searchlight team and help build on the firm’s demonstrated success in the technology media, and telecommunications sectors, especially with respect to digital infrastructure—an area that is essential to consumers and businesses in the United States and around the world. Searchlight’s flexible investment strategy and partnership-driven approach have distinguished it from its peers, allowing the firm to capitalize on opportunities that provide value for its clients and the companies it invests in. I look forward to joining Eric, Erol, and Oliver, and contributing to the firm’s continued investment efforts.”