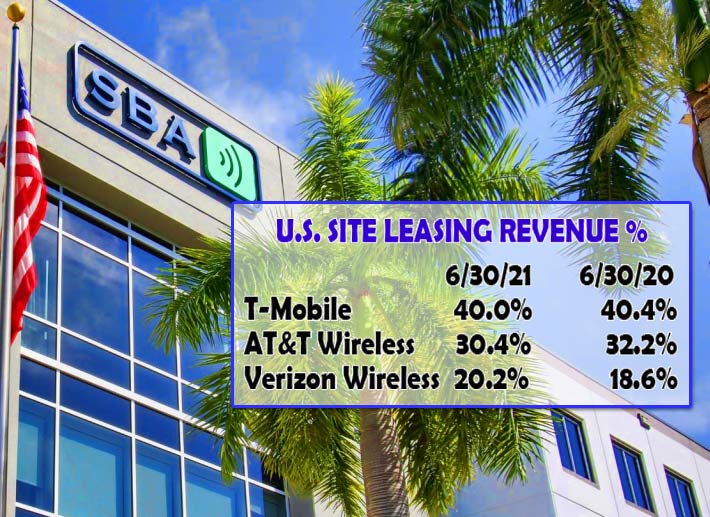 The Boca Raton, FL-based real estate investment trust said it had funds from operations of $293.5 million, or $2.64 per share, in the period.

The average estimate of five analysts surveyed by Zacks Investment Research was for funds from operations of $2.59 per share.

During the second quarter of 2021, SBA said it acquired 57 communication sites for total cash consideration of $67.0 million.

SBA also built 98 towers during the second quarter of 2021.

In addition, the company spent $11.8 million to purchase land and easements and to extend lease terms.

During their analysts call, EVP and CFO Brendan Cavanagh said that SBA had a tremendous quarter with results for the second quarter ahead of their expectations in most key areas.

He noted that the four major carriers represented 97% of total incremental domestic leasing revenue signed up during the quarter.

President and CEO Jeffrey Stoops said that the company’s strong performance in the second quarter was “one of our best in quite some time.”

“Domestically, our customers were extremely active. This quarter, we signed up more leasing revenue than we have in any quarter in seven years. We believe the second quarter was the start of a multi-year increase in US wireless carrier capex,” Stoops said.

“Our backlogs of lease and amendment applications ended up near record highs at the end of the quarter, notwithstanding the high levels of bookings, which obviously bodes well for activity levels throughout the rest of the year and into next. Our customers are focused on building out their 5G networks with a particular focus on upgrading their macro networks. Leasing activity levels were driven by initial C-band initiatives, 2.5-gigahertz deployments, FirstNet amendments, general coverage expansion and the beginning of Dish’s network build out. These initiatives also drove our services volumes to record highs.”