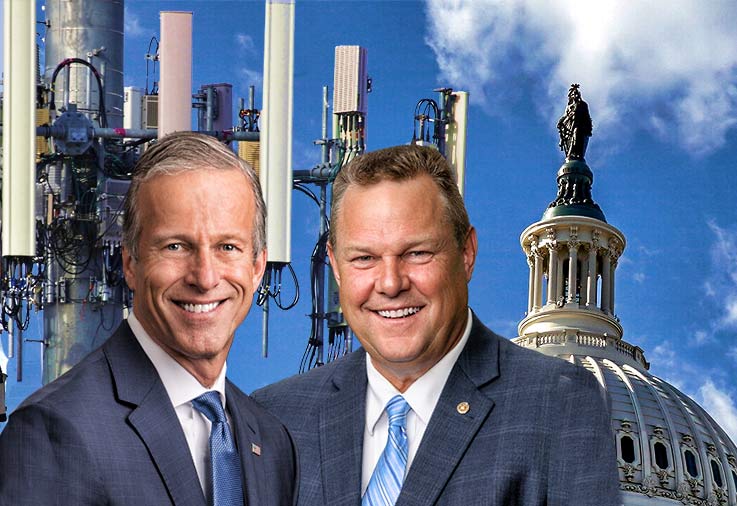 Senators John Thune (R-SD), left, and Jon Tester (D-MT) were successful in getting their amendment adopted by the Senate that addresses the workforce needs of the telecommunications industry .

“We are very pleased that Senator John Thune’s Telecom Skilled Workforce Act has been added to the bipartisan infrastructure legislation being considered in the Senate,” said Todd Washam, NATE Director of Government Relations and Wireless Industry Network.

“Senator Thune’s leadership on workforce development issues will help our industry meet the enormous demands for broadband and closing the digital divide resulting from this important legislation. NATE also thanks Senators Tester, Moran, Peters and King for cosponsoring this amendment,” Washam said.

“WIA is gratified by the overwhelming bipartisan support in the Senate for developing the telecommunications workforce. Our contractors are already working at full capacity, so the increased demand created by the $40 billion broadband package will require an increased supply of skilled workers to get the job done quickly, efficiently, and safely,” said WIA President and CEO Jonathan Adelstein

Adelstein said the Senate is now on record backing apprenticeships as an essential way to expand the industry’s workforce to speed the deployment of high-speed internet and win the race to 5G.

“We thank Senators Thune, Tester, Moran, Peters and King for their leadership and for recognizing initiatives like the Telecommunications Industry Registered Apprenticeship Program are paving the way to train workers with the skills needed so 5G can created 4.5 million jobs $1.5 trillion in economic growth over the next decade,” said Adelstein.

The Telecommunications Skilled Workforce Act was identified by NATE’s Legislative and Regulatory Committee as one of the Association’s top legislative priorities. This legislation would help close the workforce shortage in the telecommunications industry. It would require the Federal Communications Commission (FCC), in consultation with the Secretary of Labor, to issue guidance to states on how to bolster workforce efforts.

An FCC-led interagency working group, in consultation with the Department of Labor and other federal and non-federal stakeholders, would develop recommendations to address the workforce shortage. The group would identify federal resources available to states for workforce development efforts.

Companion legislation was introduced in the House of Representatives by Tim Walberg (R-MI) and Yvette Clarke (D-NY). Senator Thune’s amendment was adopted by a vote of 95-1 during debate on federal infrastructure legislation.