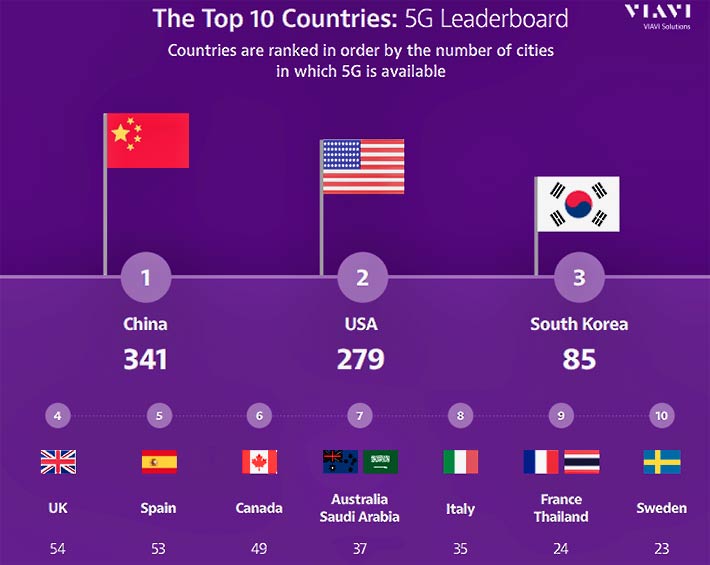 Viavi Solutions Inc.  today released new industry data revealing that the number of cities with 5G networks is now 1,336 globally, a 350 percent increase during the past year despite an ongoing global pandemic. As of January 2021, more than 30 percent of the world’s countries now have 5G availability, according to the new VIAVI report “The State of 5G,” now in its fifth year.

As adoption of 5G technology has accelerated faster than any previous mobile technology, commercial 5G networks have been deployed in 61 countries worldwide, representing an 80 percent increase since January 2020. The top three countries that have the most cities with 5G are China at 341, the United States at 279, and South Korea with 85. The U.K. now has 5G in 54 cities, followed closely by Spain with 53.

An additional 27 countries added commercial 5G deployments last year, including three countries that have already reached the top ten in terms of cities covered — Canada with 49 cities, as well as France and Thailand tied at 24. From a regional perspective, Asia has taken the lead with 528 cities; EMEA is now in second place with 459 cities; and the Americas region remains in third place with 5G available across 349 cities. In China, the number of cities with 5G grew six-fold in one year, while coverage in the U.S. increased by a factor of five.

“The critical nature of reliable network connectivity was highlighted acutely in 2020 as remote work, online learning and video chats with family and friends became the new normal worldwide,” said Sameh Yamany, Chief Technology Officer, VIAVI. “Overwhelming subscriber appetite for ever-faster speeds and greater bandwidth continues to drive service providers to invest in 5G evolution. However, their success or failure ultimately will be determined by the ability to deliver the best possible network performance and service quality. This requires robust testing protocols and assurance of increasingly complex 5G architectures.”

The State of 5G report is available here. The data was compiled from publicly available sources for information purposes only, as part of the VIAVI practice of tracking trends to enable cutting-edge technology development that allows communications service providers to command the 5G network.

VIAVI will be participating at MWC Shanghai, February 23-25, 2021 at the Shanghai International Expo Centre. The company will exhibit its lab validation, field test and assurance solutions at Booth #N1B137. VIAVI will also demonstrate its Test Suite for O-RAN Specifications.